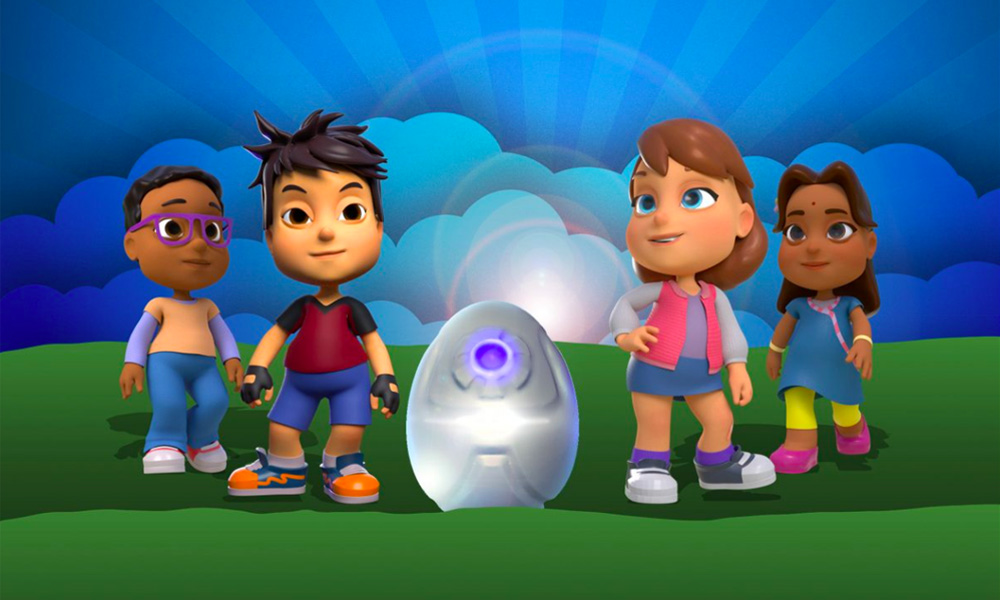 It all started after Rodrigo observed his toddler daughter continuously watching YouTube videos of other children opening surprise eggs. He was surprised to learn that those videos had hundreds of millions views each, and some even had more than a billion views. It was clear that kids were intrigued by surprise eggs. So, the idea of animal-shaped robots inside surprise eggs (EggBots) was born. Children love robots, animals and surprise eggs.

Rodrigo presented the story to business partner, Fabricio Fernandes, who added to the creativity with the idea that the EggBots could run using clean and renewable energy. The EggBots will eat whatever their human-friends eat. So, if a child finds and EggBot and eats an apple or a chocolate bar, they can scan that food on their tablet and their robot will gain energy points. The healthier the food, the higher the energy points. This is a core story-line of the EggBots production. The EggBots are clean-energy robots that flee to Earth when Dr. Felix and his minion-robots that produce dirty energy took over their planet.

What are some of the animation/visual style influences?

EggBots is a CG-animated series that has a unique and recognizable design. The animation was inspired by the colorful textures of True and the Rainbow Kingdom, as well as the movement and shapes of Super Monsters.

How many people have been working on the project and how long has it taken to complete the pilot?

Around 20 people have worked on the pilot, plus nine incredible voice talents (including Rooster Teeth’s Chad James) that gave life to the characters. This project is taking more time than it usually would because the pilot for this series is also a test-run for our team and pipeline, as we are working mostly with talented recently graduated modelers, riggers and animators fully guided by incredible heads of each department from the FF Miners crew, Full Sail University instructors, and REBL HQ professionals (which include several ex-Disney animators, such as Eileen Middleton, head / advisor of animation.) For the full 26-episode season, we will work with approximately 120 professionals (animators, modelers, environment, shaders, compositing, sound), and it is our goal to continue production here in Florida.

What are future production plans for Eggbots?

We took the pilot to MIPCOM in France last month. The plan is to start production by the beginning of 2019.

Where is the animation being produced and which animation tools are being used?

We are producing the animation in Orlando, Florida, mostly within Full Sail University’s campus, where REBL HQ is located. REBL HQ is a digital entertainment studio that serves as an innovation hub for the evolving world of online video delivery systems, production techniques, and storytelling. Our team is using ZBrush for modeling; Maya for animation, environment and rigging; Substance Designer for textures; and MudBox for blending shapes. The pilot is being rendered using Pixar’s RenderMan, but Redshift was chosen for the remainder of the season.

How is the production being funded?

Unfortunately, Florida doesn’t have any grant or tax incentives like production hubs in Georgia, Los Angeles and Canada offer, but there’s a great deal of talent in the area. FF Miners Entertainment — the company jointly owned by Foca and Fernandes — does not want to rely on state and tax incentives for their productions. The company was fully funded by Prime Bridge Capital – a venture capital firm with investors primarily from Brazil – which is focused on entertainment content ventures. By using the fresh talents of recent graduates from one of the best-respected entertainment schools in the country – Full Sail University – FF Miners has been able to keep the costs involved in the production down while keeping the quality at a very high level. For FF Miners, producing EggBots in Florida just makes sense.

What are some of the other projects the studio is working on?

What is your take on the current global animation scene?

And we know streaming content only continues to grow. At this time, most of this is polarized and the intellectual property is staying with the companies based in California; however, the creative production is occurring in places where the government gives incentives, while a lot of the heavy lifting is being done in countries with workforces that will work for lower rates. We want our profits to remain in Florida and – because FF Miners is a startup baked by a venture capital firm – we have the ability to not follow the crowd. If our plan works – and it is working so far – we’ll be bringing animation production back to Florida again.

What are some of the biggest challenges in the process of making Eggbots?

At our core, we believe in developing the talent of recent graduates and the future of animation, so it has been important to us – although not always easy – to adapt a regular animation pipeline to this workforce. We had to identify a project management tool that was easy for all of our team members to use. We started with ftrack, however it was obvious early on that it was going to be complicated for all of our users, so we decided to move to a custom base on Airtable and Frame.io, and that mix seems to have worked best for all of us for the pilot. Moving into the remainder of the season, we aim to go back to ftrack or start working in Shotgun as the team has become more used to a production pipeline.

What do you hope audiences will take away from the production?

We want to help children understand the importance of healthier food habits, gain a greater respect for diversity, and break down some of the traditional gender stereotypes.