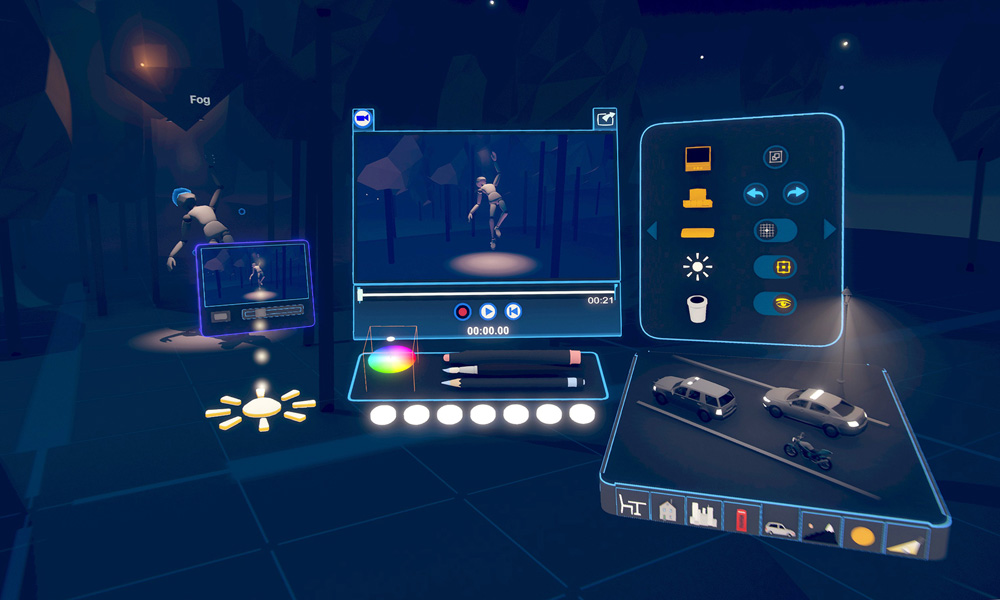 As we embark on a new age of VR storytelling, artists are seeking new tools to help expand their creativity in the new field. One of these new tools is Tvori, which was first introduced two year ago, and has had several major updates since then. Focusing on simplicity and speed, the team at Tvori are pushing to expand the possibilities of animation in real-time, offering keyframe animation with 3D curves editing as well.

According to the product creators, animators don’t need prior knowledge of 3D content creation to begin using Tvori. Artists can use the product to create animated projects or use it as a tool for quick story prototyping, delivering animatics or movie previz material. Tvori has a library of simple shapes, props and effects to use, and it supports import and export of objects, images and sounds. Tvori supports Oculus Rift, HTC Vive and Windows Mixed Reality; available on Steam, Oculus store and Viveport.

Jeremy Casper, faculty and co-director at L.A. Film Studies Center, began using Tvori only a few months ago, and he is already a huge fan. “I’ve been a fan of computer generated animation since its inception,” he tells us. “I’ve admired legendary animators from a far, always regretful that I didn’t tackle the steep learning curve of 3D modeling and animation earlier in my career. As my filmmaking career took me in other directions, I resigned myself to the fact that I would never fulfill my dream of creating animated movies. But this past June, after just a few weeks of owning a virtual reality rig, my world was turned upside down when I discovered Tvori — an innovative virtual reality 3D animation program that bridges the gap between technical ‘know how’ and the creative process.”

Casper says he was building and animating scenes using Tvori only hours after downloading the program on his Oculus Rift. “I felt like Ray Harryhausen, physically interacting with my models and setting up shots. I quickly recognized Tvori’s vast potential. For the first time in animation history, a user with absolutely no previous 3D animation knowledge can immerse themselves inside a virtual world, build scenes, create characters, set up lights, film with virtual cameras, and most importantly… tell stories.”

“As a film instructor at the Los Angeles Film Studies Center, I devoted the last 10 years of my career to learning, teaching, and executing screenwriting and storytelling,” notes Casper. “I value ‘story’ over all things, which is why the tools that Tvori gives to me as a filmmaker are so important. I don’t have to get bogged down in the technical side of animation; I can jump straight into crafting narratives.”

Casper mentions that Tvori comes with a library of primitive shapes and basic objects, so users can start creating immediately. “It supports importing pre-skinned characters, created in other 3D modeling programs (OBJ and FBX files), and seamlessly imports objects sculpted in Oculus Medium and other VR sculpting programs,” he adds. “Whether you need to create quick pre-visualization of scenes for live action films, build mockups for virtual reality experiences, or produce finished pieces of animation, Tvori is a must for all serious storytellers, filmmakers, animators, and virtual reality developers.”

As a film educator, Casper was also excited to introduce his students to Tvori. “Less than a year ago, my colleagues and I were struggling to find a way to teach storytelling in VR without taking our students through countless hours of teaching them computer programming and 3D modeling,” he notes. “Now, with Tvori, students who have no previous 3D animation experience whatsoever, can begin animating and telling stories… on the very first day of class!”

“Less than four months ago, creating an animated short film seemed impossible,” Casper maintains. “But now, I am ready to Tvori gave me the opportunity to fulfil a lifelong dream of becoming an animator and has made animation accessible to everyone.

You can watch a trailer for Casper’s short Lightning: A VR Story here.

Writer Gabriele Romagnoli is another first-time animator who created a VR project titled A Lupus Butterfly using Tvori. “I always loved to tell stories but never had the tools to bring them to life,” says Romagnoli. “Animation programs have a steep learning curve and require hours of practice before being able to control and animate a scene: buttons, slider, panels, timelines. It all changed when I was introduced to Tvori. Within 30 hours I was able to create from scratch, and no prior animation experience, a short animated video showing the struggles of patients affected by lupus (a life threatening autoimmune disease).”

“Creating the set in VR with Tvori was as easy as assembling a LEGO scene: import models, change size, color and shape,” says Romagnoli. “Animating is also intuitive, and soon a more fine-tuned control of the keyframes is going to make the animation process accessible for anyone! You can also animate your character following an imported video reference. How cool is that?”

You can check out Romagnoli’s work here.