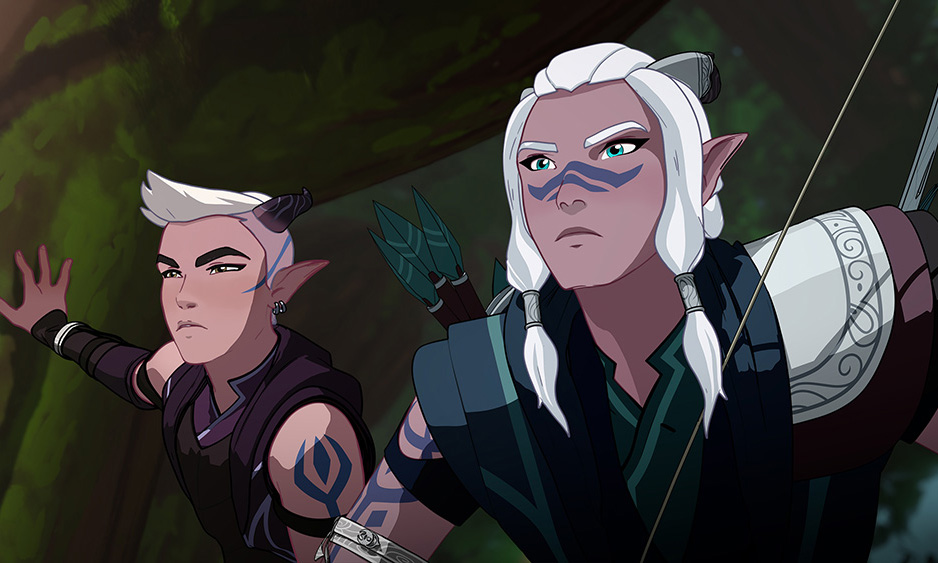 ‘The Dragon Prince’: All About Elves, Dragons and Ancient Magic

The Dragon Prince, the new show from the head writer of Avatar: The Last Airbender, casts its spell on Netflix.

Fan of Avatar: The Last Airbender were thrilled this summer when word got out that Netflix was premiering a new series by that show’s head writer, Aaron Ehasz. The Dragon Prince arrives this month on the streaming service and promises to be a gripping fantasy epic, set in a world where Shadow Elves are at war with greedy humans over access to powerful magic. The first nine-hour season of the show, which is a colorful mix of The Lord of the Rings, Game of Thrones and Dragon Lair, should keep viewers engaged and asking for more. 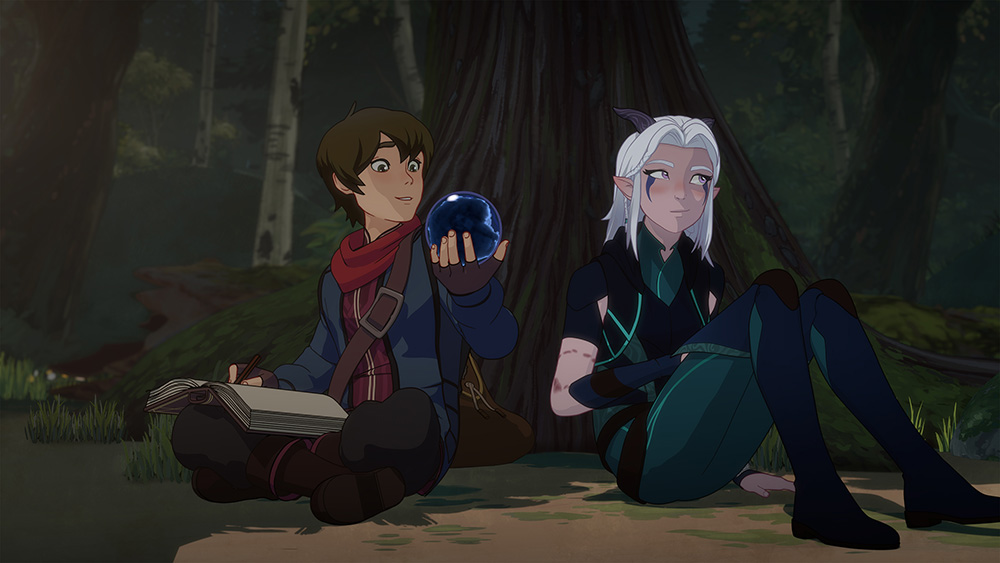 The Dragon Prince is the first animated series produced by Wonderstorm, a company formed by Ehasz and collaborator Justin Richmond to create video games and expanded media simultaneously, with the aid of investor MWM. Richmond, who was one of the key creative forces behind Uncharted 2 and 3, met Ehasz when they both worked at Riot Games (League of Legends).

Ehasz, who has had an illustrious career writing for shows as diverse as Ed, Mission Hill, Sit Down Shut Up and Futurama, says when he formed Wonderstorm, the goal was to build franchises that lent themselves to both storytelling and play. “The things we loved watching when we were growing up had amazing characters and involving stories,” he says during a phone interview. “They also offered wonderful possibilities for fans to explore their worlds through video games, toys and playthings.”

“We are telling a cool, epic fantasy story that has heart, humor and characters that people will love. I just feel lucky that we’ve been able to build it with our team and hope audiences will agree when they see the show.”
Co-creator and exec producer Aaron Ehasz

Ehasz and his creative team decided to set The Dragon Prince in a world where acquiring magical powers was complicated. “These powers were arcane and difficult to learn, so humans had to apprentice with a wizard for years,” he says. “But then, in this world, someone came up with a quick, dirty shortcut that extracts this magic from creatures such as unicorns and griffins for a quick, powerful burst. We started to think about the conflicts that would create. There are certain people going around hunting unicorns for their horns and griffins for their talons and feathers. But then, more intelligent, compassionate people would have a problem with that.”While Wonderstorm is based in El Segundo, Calif., the bulk of the show’s intricate animation is created by Vancouver’s Bardel Animation (Dinotrux, Dawn of the Croods, DC Super Hero Girls), overseen by none other than industry veteran Giancarlo Volpe, whose credits include Avatar: The Last Airbender, Star Wars: The Clone Wars and Star vs. The Forces of Evil. A team of about 150 people work on the project, according to the producers. 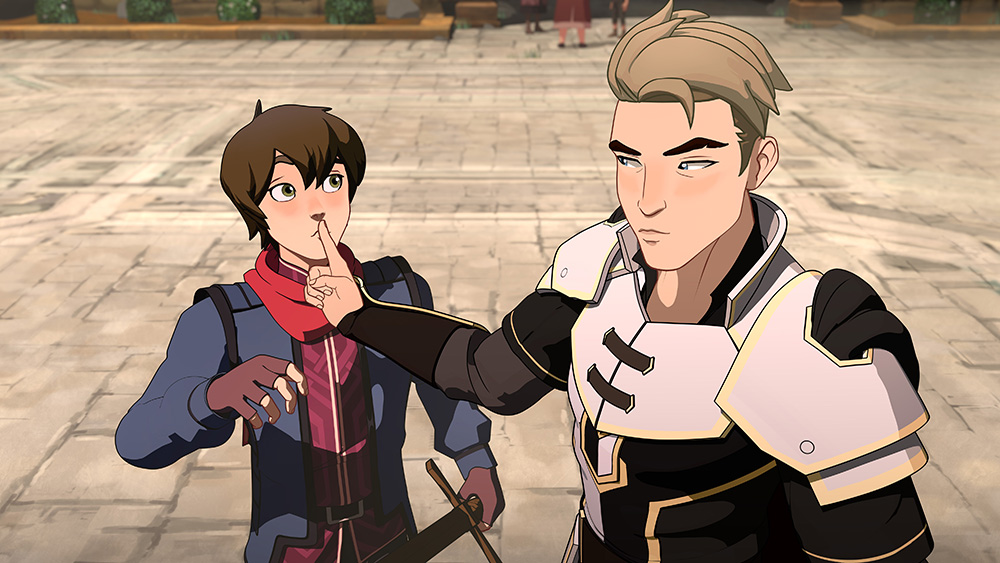 Citing the works of Miyazaki, Avatar: The Last Airbender and The Legend of Korra as visual inspirations, Richmond says the approach was certainly different from what they had worked on before. “We are trying something new, which is to leverage a Maya-based CG pipeline to create designs that are made to look like traditional 2D,” says the director. “We use hand-painted backgrounds and all the traditional concept designs that are done digitally, but we add additional render support and ink and paint on top of the CG. A lot of love and attention to detail is essential to our show.”

Ehasz chimes in: “It is truly handcrafted, because people are going over shots of faces and little things to make them just right. There are the details in the armor or cloth in CG that you can’t get in 2D, so we are going for the best of both worlds. The people who are working on the show are amazing artists and huge animation fans themselves, so they are crafting every detail lovingly.”

Both Ehasz and Richmond praise Netflix for not clipping their wings with notes and restrictions. “They gave us an incredible freedom to tell the story we wanted to tell,” says Ehasz. “This is the first time since Avatar where I felt the network situation was completely supportive of the passionate people who are building this project. It was a very positive and energizing situation, and very comparable to the Avatar experience.”

Of course, there have been challenges along the way as well. “One of the main challenges was that we are a new company which was formed to build a show and a game at the same time,” notes Ehasz. “We were fortunate to have a partner like MWM,” — an L.A.-based diversified media and entertainment company that specializes in cross-pollinating content between film, TV, live events, digital video and AR/VR — “They helped us cross over from idea and vision to completion and delivery.”

However, Richmond points out the benefits of building the animated series and its tie-in game at the same. “Some of the senior writers of the show were game designers in their lives, so as a result both the game and the show will feel like they are of the same world. Everything will feel very close.”

So, does Ehasz feel that The Dragon Prince shares similarities with his huge Nickelodeon show Avatar? “Obviously, we share the same DNA, but we’re not the same team,” he points out. “A significant part of the Avatar creatives went on to make Korra and another group is working on Voltron right now. We are a different subgroup of the original team. It’s interesting because Jenna Boyd, who is our executive at Netflix, was our executive at Nickelodeon for Avatar. And Jack DeSena who was the voice of Sokka on Avatar, is one of our show leads, Callum. Mostly, we were really inspired by the audiences for Avatar who really connected to the show in a deep and meaningful way. We are hoping that we can create the same kind of connection with this show.”

Looking back at the past three years, Ehasz and Richmond are quite proud of what their new company has been able to achieve. “I’m really pleased that we picked a style, a look, and a type of show that hasn’t really been done this way before,” says Richmond. Ehasz adds, “We are telling a cool, epic fantasy story that has heart, humor and characters that people will love. I just feel lucky that we’ve been able to build it with our team and hope audiences will agree when they see the show.”

The first season of The Dragon Prince arrives on Netflix on September 14.