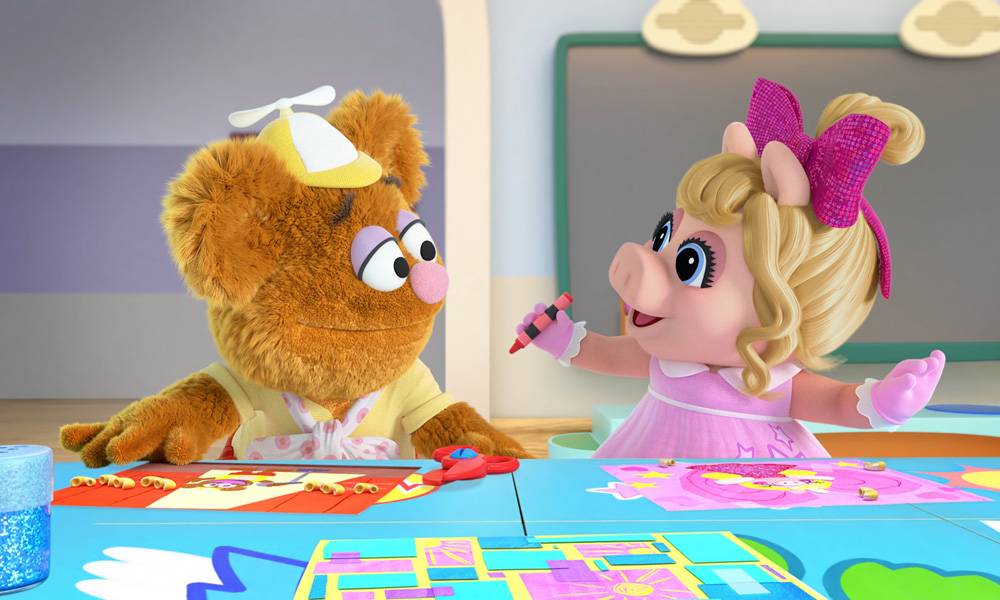 Disney Junior, the No. 1 preschool channel, is packing on its growing portfolio of hits for kids aged 2-7 with further episode orders for three animated series: Muppet Babies, Vampirina and Puppy Dog Pals. These shows already reach a combined average of 515 million households via Disney Channels and Disney Junior channels around the world, and have garnered more than 360 million views on YouTube and social media, and nearly 140 million views on VOD, DisneyNOW and related Disney Apps.

The announcement was made by Disney Junior’s SVP Original Programming, Joe D’Ambrosia, who commented: “We’re privileged to work with an amazing group of talented creators every day. Our Disney Junior production teams continue to deliver a diverse group of aspirational characters and entertaining, heartfelt stories to which our youngest viewers have developed a remarkable emotional connection. We look forward to more of their imaginative stories on screen and to new opportunities for preschoolers and parents to extend that experience.”

Muppet Babies, the CG animated series that premiered in March 2018, has been picked up for a second season. It chronicles the hilarious playroom antics of a young Kermit the Frog, Piggy, Fozzie Bear, Gonzo, Animal and brand-new Muppet Baby, Summer Penguin. Tom Warburton (The 7D) is executive producer. Matt Danner (Gravity Falls) is supervising director and also voices the role of Kermit. The series is a production of OddBot Inc. in association with Disney Junior and The Muppets Studio.

Vampirina, the first vampire series for preschoolers, premiered in October 2017 and has now been renewed for a third season. It stars Lauren Graham, James Van Der Beek and Isabella Crovetti as the Hauntley family, friendly vampires who recently relocated from Transylvania to Pennsylvania. Inspired by Disney Publishing’s popular children’s book series Vampirina Ballerina, the series comes from the creative team behind Disney Junior’s Peabody Award-winning animated series Doc McStuffins. Chris Nee, who executive produced seasons one and two, will serve as consulting producer for season three, with Chelsea Beyl and Norton Virgien as co-executive producers. Beyl is also story editor. The series is a production of Academy Award-nominated animation studio Brown Bag Films in association with Disney Junior.

Puppy Dog Pals, created by comedian and actor Harland Williams, premiered in April 2017 and has been greenlit for a third season. It centers on two fun-loving pug puppies, Bingo and Rolly, whose thrill-seeking appetites take them on daily adventures around their neighborhood and beyond. Williams also serves as consulting producer with Sean Coyle (The Awesomes, Mickey Mouse Clubhouse) as executive producer. The series is a production of Wild Canary in association with Disney Junior.

Combined, these three properties have more than 50 book titles and comics from Disney Publishing, multiple DVD releases from Walt Disney Studios and various soundtracks from Walt Disney Records, which can be heard on Apple Music’s Disney Junior Radio Station. Both Vampirina and Puppy Dog Pals have robust product lines at retailers nationwide. An exclusive Muppet Babies toy line from Just Play will be available at Target beginning this fall, with a wider assortment set to debut in stores nationwide in spring 2019. Additional items including plush are available now at Disney store and shopDisney.com. The shows also featured in the popular Disney Junior Dance Party On Tour, which sold out 55 shows across 54 cities during its inaugural leg of the US tour this spring and will begin its fall run on September 14.

For the past five years (2013-2017) and 2018 to date, Disney Junior is the #1 preschooler network in Total Viewers, Kids 2-5, Girls 2-5, Boys 2-5 and Women 18-49. The popularity of Disney Junior and its hit series have provided opportunities across Disney businesses including Disney Parks & Resorts, which today marked the debut of the Vampirina character at Disney California Adventure park at the Disneyland Resort in Anaheim and Mickey’s Not-So-Scary Halloween Party in Magic Kingdom park at Walt Disney World Resort in Florida.