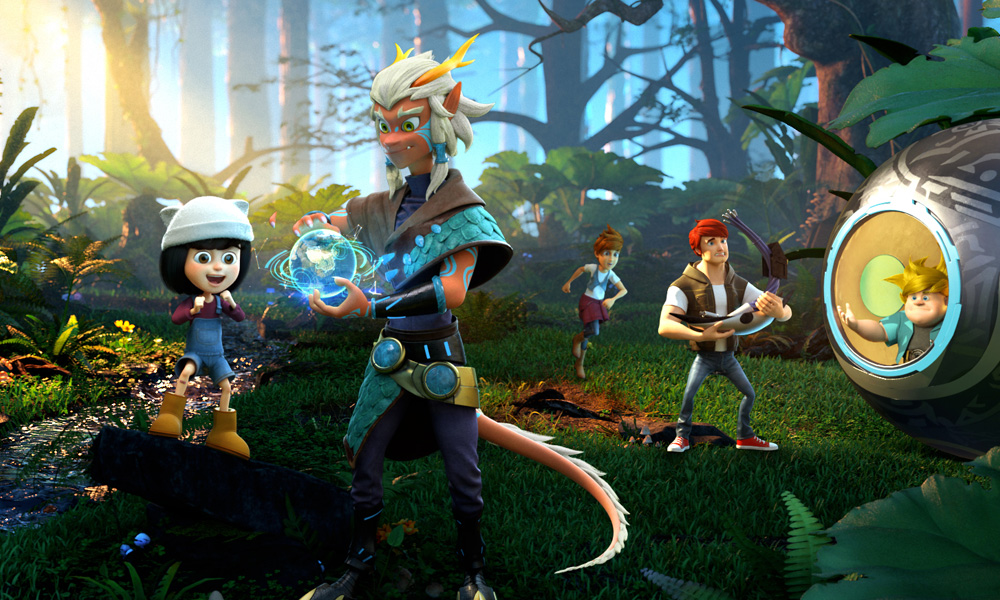 Some of the strongest performers in Britain are taking flight with a new CG-animated project titled Watch the Skies — a sci-fi adventure about intrepid young heroes on a mission to rescue and alien boy whose starship crashed to Earth. The project, due out in 2019, is a co-production of DeZerlin Media (China) and Zycon Media (UK).

Sean Bean (Lord of the Rings, Game of Thrones, Goldeneye) will voice tech billionaire Peter Fox, who is determined to get his hands on alien technology at all costs, and Asa Butterfield (Ender’s Game, Hugo, Miss Peregrine’s Home for Peculiar Children) voices St’aar, the intergalactic teenager on the run from Fox and his security force, headed by Major Laura Jude, played by Gemma Arterton (Quantum of Solace, Clash of the Titans, Prince of Persia).

St’aar is aided in his escape by the children of the same alien hunters out to capture him, with Sam Claflin (Hunger Games, Pirates of the Caribbean, The Huntsman) as the plucky teen leader, Spinner; Laura Haddock (Guardians of the Galaxy, Transformers) as his stunningly talented girlfriend, Izzy, who also has eyes for the alien teen; and David Fynn (Game of Thrones, Sherlock, Doctor Who, Black Mirror) playing Thor, the self-styled Cyber Viking who cracks the alien tech to help their new friend get home.

This coming of age story that explores perception vs. reality with action and humor comes from writer-director Mark Byers (Criminal Act, The Treatment, Diggin’ Up Business). The pictures is produced by Lin Zhang, CEO of DeZerlin Media; and Mohammed Khalid, CEO of Zycon Media. Casting director Melsie Bourne (The Bourne Consultancy, UK) worked closely with agent Sara Elman of Advoice (a division of Independent Talent Group) assemble the cast.

“Melsie Bourne and Sara Elman have brought us a remarkable array of talent who are passionate about the story and the characters they will portray,” said Byers. “And I am particularly excited to have a veritable who’s who of sci-fi and fantasy favorites in our cast.”

Watch the Skies is the first in a 10-movie animation slate between DeZerlin and Zycon that was announced by UK Prime MInister Theresa May in February as part of a package of UK-China creative/cultural collaborations. L.A. entertainment lawyer Brian J. Murphy polished the co-production agreement and closed the talent deals.

“We are pleased to have found a creative kindred spirit in China’s DeZerlin Media,” said Khalid. “Lin Zhang has a far-reaching global vision, and has created IP that is both highly commercial and also touchingly heartfelt. The combination of their creative brains and our production brawn will cut through all cultural barriers.”

“This partnership with Zycon represents a milestone for the Chinese entertainment industry,” said Zhang, “and marks the beginning of the globalization of content created in China and enjoyed by audiences everywhere.”

Watch the Skies is in production, with the team moving into development on subsequent projects including comedy-adventure Codename: Furball — about a remarkable secret agent cat who save England during World War II; and Hawkins and Silver, a steampunk retelling of the classic Treasure Island tale set in a world shared by humans and talking animals.