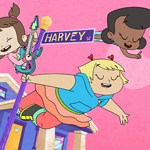 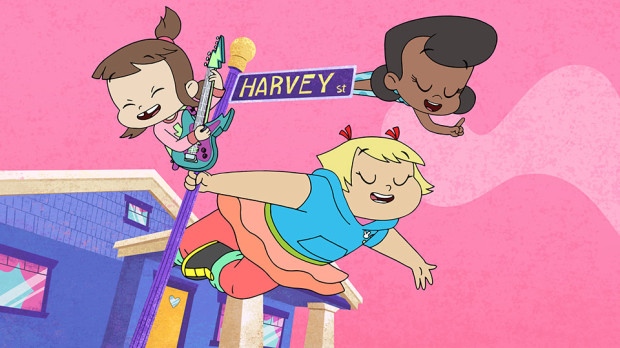 Back in the late 1940s and early ’50s, Harvey Comics — home of Casper the Friendly Ghost and capitalist kid Richie Rich — introduced several female characters to its readers, which were quite popular during their heyday. Little Dot, Little Lotta and Little Audrey were colorful and wholesome characters that echoed the standards and white-bread mentality of that era.

This month, the three girls have been redesigned and retooled for the digital age and will be the stars of their own DreamWorks/Netflix series called Harvey Street Kids. The show follows their adventures as they explore low-tech pastimes such as hanging out in treehouses or playing kickball and waiting for the 42-flavor ice-cream truck. Frankly, the series seems to be a wonderful return to a time where kids didn’t have to be plugged in to their digital devices and sedated with entertainment 24/7.

“I was so excited to have this opportunity to do a show that was really cartoony and centered on three strong, distinctive female leads,” says supervising producer Aliki Theofilopoulos, a two-time Emmy-nominated storyboard artist and writer whose many credits include Disney’s Phineas and Ferb, Mickey Mouse and The Descendents: The Wicked World. “The take was, what if a bunch of these comic-book characters were living together on Harvey Street. It was a low-concept show about childhood.”

As two-time Emmy-nominated executive producer Brendan Hay, who has worked on such diverse shows as The Simpsons, Robot Chicken and Dawn of the Croods, points out. “It always feels like it’s summer or the weekend on the show. We don’t have any adult characters, and it’s a total kid society — all set during that time after school or before you go home to dinner. There’s the core childhood and friendship dynamics that are really timeless and universal.”

The show producers point out that they’re proud of the fact that all three leads have very distinctive personalities, and aren’t treated as token characters or sidekicks as has been the case in many animated series in the pat. They have also made it a point to make sure the girls are suitable characters for today’s audiences.

“I was so excited to have this opportunity to do a show that was really cartoony and centered on three strong, distinctive female leads.”

“We have modernized the girls, and they each have special character traits,” notes Theofilopoulos. For example, Lotta is super sweet and super strong, while Dot is totally obsessive. Lotta is unapologetically this taller, larger character, and she completely owns it. But instead of being all about food, like she was in the comic books, she is caring and passionate on the show. Also, in our show Dot is African American, as we wanted to bring diversity to Harvey Street so that it really reflected our modern world.”

For the show’s visuals, the creative team opted for visuals that reflected the “Saturday afternoon” feeling and mood of childhood. “We wanted it to look modern, but have a throwback quality to it as well,” says Theofilopoulos. “I had worked on Disney’s Mickey show and thought that Paul Rudish and company had done such a great job with it. So, we brought in Peter Emmerich as art director, and we were very much inspired by Yogi Bear cartoons and paintings from that era.” Theofilopoulos and the art team used different color palettes to suit the modern sensibility of the show.

“I think our storyline and designs really spoke to 2D animation,” she adds. “With our animation, we made a point of pushing squash and stretch. I always say that the proportions of our characters are very similar to Porky Pig’s — a bit of an old-school vibe to them. It was about finding the snappiness and great colors that made it still modern and also honored the throwback vibe of our characters’ origins.

The animation is all hand drawn, originating with pencil on paper. A team of 30 people work on the show’s DreamWorks offices. The bulk of the animation production is done by eMation and NE4U studios in Korea.

While Harvey Street Kids is a script-driven show, Theofilopoulos and Hay mention that they are always working with the board artists to come up with gags and share their ideas. “We really mine our own childhoods,” says Hay. “What is something we did when we were kids and what is the most ridiculous extrapolation of that? We work together as a room. Then we do a table read with our artists and like to get them involved, and the artists have fun pushing the designs. We also try and do group records with our voice actors as much as possible. We really do try to pull everyone in together so everyone has ownership of the show.”

The team has been working on an accelerated schedule to make the season’s delivery time in June, which is always a challenge. “The thing about streaming is that you have time to find the show across all the episodes. You can go back and tinker to make things better. But the other side of it is that you are building the train while it’s already moving!”

“We don’t have any adult characters, and it’s a total kid society — all set during that time after school or before you go home to dinner. There’s the core childhood and friendship dynamics that are really timeless and universal.”

The show’s creators both sing the praises of DreamWorks for allowing them to really explore the potential of the characters and have fun with the possibilities of the medium. “We are really proud of this incredible team we have on this show,” says Theofilopoulos. “Brendan and I have such a great partnership. Sometimes, we barely have to speak. We give each other a look, and we know exactly what the other one is thinking.”

They are also both quite amazed at the current state of animation and the crazy boom everyone is witnessing in the community. “There are a lot of different types of stories told for different audiences,” says Theofilopoulos. “We have CG shows, Harmony shows, stop-motion series, adult shows. It’s so wide open. It’s really an exciting time for both content creators and audiences.”

Hay points out, “I am really proud of the fact that our show’s core three characters are so awesome and funny, and proud of our board artists and designers, the look of our show is so great. Our three leads are hilarious and awesome … It may sound cheesy, but this is really a rare project that I’m just proud of the whole thing.”

“We made a point of hiring people that we liked,” agrees Theofilopoulos. “Our crew is as diverse as our show. We have lots of different voices, ages, from different walks of life represented — and they’re all very passionate about the work. I look at each episode and feel like everyone is represented all across the board.”