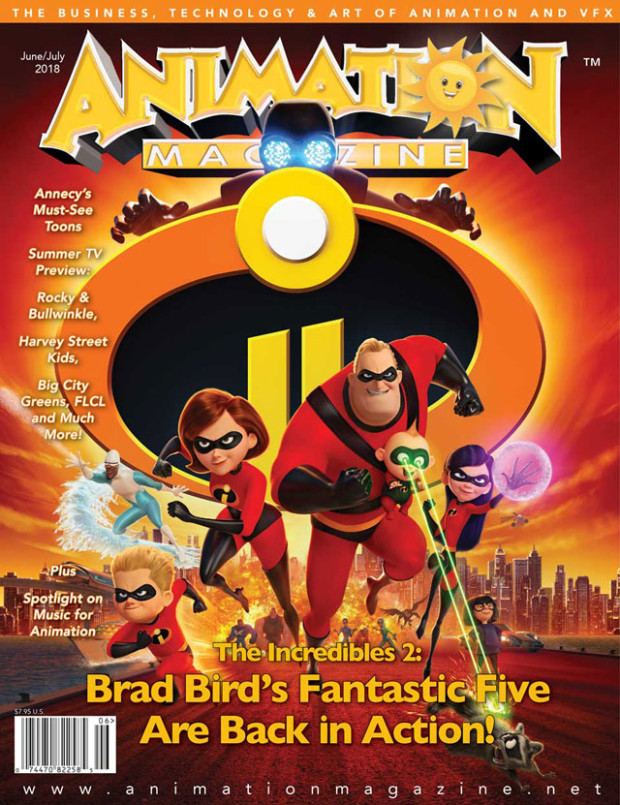 Bigger, Faster and Even More Incredible!

Les Armateurs’ upcoming 2D-animated movie The Swallows of Kabul paints a frank picture of the harsh realities of life in Afghanistan.

Animation at the Movies: 2018 and Beyond

As the summer blockbuster season arrives, we undertake to give you a quick, comprehensive guide to the tentpole toons, eye-opening imports and underdog entries coming to theaters in the next couple of years.

Score One for Animation

Some of the top composers working in the animated feature arena discuss the essentials of their craft.

Music to Soothe the Toon Beasts

The talented composers behind some of today’s best-loved animated shows discuss their creative process.

A Sneak Peek from Paramount and Ilion

We had the chance to interview some of the diverse animation artists from around the world who are screening their colorful and highly entertaining projects at the world-class event.

A Pilgrimage to the Home of Astro Boy

Our correspondent pays a visit to Tezuka Productions in Saitama.

Riding the Toon Boom in Brazil

The animation sector is benefiting from the growing appetite for content in the country.

The Cry of the Long-Haired Camel

TV animation veteran Josh Selig takes us along on his recent trip to China and tries to decipher the country’s new government content policies.

Jay Ward’s beloved characters are back in DreamWorks’ clever new reboot of The Adventures of Rocky and Bullwinkle.

An Animated Guide to City Life

The Return of the Alien

Cloudy with a Chance of Friendship

Having His Cake and Eating It, Too!

Immersed in the Magic of Méliès

Google Spotlight’s Back to the Moon VR short pays homage to the wonderful illusions of the French cinema pioneer.

Up Close with Dogs and Puppets

Riding with Mickey, Minnie and the Minions

New attractions at Universal and Disney parks use state-of-the-art animation to elevate the ride experience.

More Magic from the Merc with a Mouth

Your job as a business.

The feline force behind Simon’s Cat.