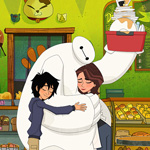 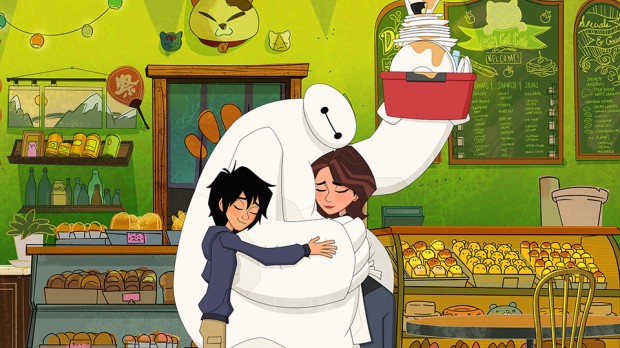 Disney TV Animation’s 2D follow-up to the feature looks to delve deeper into the characters, setting and history of the superhero sextet.

“For anybody who does a spin-off of a movie—a good movie—the main character goes through an emotional journey that’s sort of a transformation and they’re pretty complete at the end of it. And Hiro went through something really big with grief and revenge and healing and all of that [in Big Hero 6],” McCorkle says. “As storytellers, we were excited [about doing a series], because the next day he still has plenty to learn.”

The series also is a chance to more fully explore the characters and world created for the feature, which set up young genius Hiro Hamada and his health-care robot Baymax with a group of heroes that includes GoGo Tomago, Honey Lemon, Wasabi and Fred in the mashup city of San Fransokyo. The movie was loosely based on Marvel Comics characters created by the writing group Man of Action.

Most of the original voice cast from the feature returns for the series, with Ryan Potter as Hiro, Scott Adsit as Baymax, Jamie Chung as GoGo, Genesis Rodriguez as Honey Lemon, Maya Rudolph as Aunt Cass, Alan Tudyk as Alistair Krei and Stan Lee as Fred’s dad. New to the cast are Khary Payton as Wasabi and Brooks Wheelan as Fred.

Character designer Jose Lopez says the first major decision made in translating Big Hero 6 to TV was going with a 2D look instead of the 3D CG imagery used in the feature, giving the show a chance to find its own approach to the material. “We try to retain this element of the hand-drawn energy, where everything is just a little bit off, and I think that’s creating a unique and appealing language for our designs,” says Lopez

Lopez says the team focused on silhouettes and graphical shapes to push the designs to a place where they worked for 2D, with Filippi referring to the influence of Bruce Timm’s iconic work on Batman: The Animated Series. “He made sure that there were anchor points for the animators to latch onto so that when you animate a character you definitely have these stylistic points that are going to make it that character. That’s something we were definitely going for,” says Filippi.

One of the less obvious influences on the look of the show is the 1961 Disney classic 101 Dalmatians, which Lopez says they learned was also an influence on the design of the feature’s backgrounds. “We discussed things like how the lines would intersect, what type of lines we would use, and then going for this rough line that’s trying to emulate the Xerox pencils of previous Disney features,” says Filippi.

The breakout star of the movie was Baymax, whose soft, inflatable form was given comedic wit via Adsit’s sharp comic timing. McCorkle says the feature filmmakers were correct in advising him that writing Baymax was tough to get right. “They talked about their guidelines with him and how, for them, a lot of it was exploration—if a moment would be too robotic or would be too human—and finding the exact balance,” he says. The series relied on Adsit’s knowledge and affinity for the character in deciding how lines could be delivered and what was and was not in character for Baymax.

Designing the character for 2D was a separate challenge. “Baymax is a character that is very soft and round, and he has to project a certain type of personality,” says Lopez. “I think that those elements, in terms of the line and the shape elements, has helped him quite a bit. But then when we go to the superhero version of him, we’re going to be able to push that graphic element and push the shapes quite a bit more.”

Having come to terms in the feature with his brother’s death, Hiro faces several new challenges in the series. “Now, he’s trying to be a better kid to Aunt Cass. He’s new at school, he’s at this college, and he’s new at being a superhero,” says McCorkle. “Those are three different tracks where we’re going to get emotional stories for his growth…The other thing was the other members of the team were all funny characters and fun characters, and vivid in the movie, but there wasn’t a lot of screen time to explore them. So, that’s a whole other thing.”

The series will explore the characters as regular kids, which helps them feel more real and provides some stakes for the superhero smack-downs, as well as a lot of potential for comedy.

The setting of San Fransokyo offers plenty of ideas on its own. Filippi says with Fred’s father being voiced by Marvel Comics icon Stan Lee, the series can go into San Fransokyo’s super-heroic past.

“The fact that [Fred’s dad] was a superhero, in a past time when superheroes were around in San Fransokyo, gives us opportunities to battle with his old foes,” he says. “We have some fun with that in a very comic-book way.”

The city itself will remain a dense, multicultural setting—a challenge on a television schedule and budget, says Schooley. “We have to do it in a way that’s going to appeal to the audience, but also be doable,” he says. “We went through a lot of different discussions and explorations and reviews to finally come to where we are now.”

Snipple Animation Studios in the Philippines and Nørlum in Denmark are animating the series, while the opening title sequence was done by Imaginary Forces. Big Hero 6 was picked up early, with a second season ordered months in advance of the show’s still to-be-announced fall premiere.

“We definitely have a mythology that unfolds over the course of the season,” says McCorkle. “There’s all these things that come up and they all end up by the end of season intersecting in a way that’s pretty big and dramatic.”

Big Hero 6 The Series will launch with a one-hour movie “Baymax Returns” on November 20 at 8 p.m. on Disney XD and Disney Channel. Two new episodes will be available on the DisneyNOW app after the movie. The series will premiere in early 2018 on Disney XD.