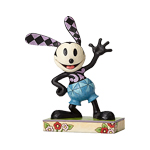 Like many in the animation industry, I was very aware that Oswald the Lucky Rabbit was an early and popular animated character that eventually faded into obscurity. Eclipsed by the popularity of Mickey Mouse, Oswald went through several design changes and by 1938 Universal stopped making cartoons starring that rambunctious rabbit. Many of the cartoons were forgotten, and some even lost to time. Nevertheless, Oswald was an important part of animation and The Walt Disney Company history.

In early December of 2011, I was sitting in my office at the Walt Disney Animation Studios in what is affectionately known as the “Hat Building” because of The Sorcerer’s Apprentice hat that adorns the entrance. On my computer screen was an article describing a recently found Oswald the Lucky Rabbit cartoon titled Hungry Hoboes that was being auctioned off in Hollywood. It was an interesting piece of history; how wonderful, I said to myself, that a print of a previously thought-to-be-lost cartoon had surfaced.

Just as I finished reading that article, my e-mail chimed with an incoming message from my bosses, at the time, at the studio. They had forwarded an e-mail from someone inquiring about the Disney created Oswald cartoons. At that serendipitous moment, the planets seemed to have aligned just right for the Oswald the Lucky Rabbit lost cartoons!

I responded back with an e-mail letting them know that speaking of Oswald, one of the lost Oswald cartoons, Hungry Hoboes, had surfaced and it would be in an animation memorabilia auction in Hollywood on December 14, and I suggested that the company should purchase it. They agreed and got the funding allocated so that I could make that purchase on behalf of the company. So began my involvement in a multi-year hunt for the lost Oswald the Lucky Rabbit cartoons.

I was drawn to Oswald not just because of the historical nature of the character but also by his design and animated antics. Oswald has a very simple and appealing design that leaves a lot of room for inventive animation. When I watch the Oswald cartoons, what strikes me most is the unabashed imagination the animators had for dismembering, contorting, and shape-shifting the characters. They used the medium in the way that it was meant to be used. They took cartoon license with the characters in an anything goes attitude, seen in the use of surreal situations where thought bubbles are used as balloons or an animated word comes alive and takes on the attributes of a quadruped animal.

That has been lost in a large part in today’s contemporary animated films that are heavy on humanoid characters. It would be unsavory to dismember a human character, but seeing Oswald pop off his lower leg and foot, kiss it, then rub it on his head as a “lucky rabbit’s foot” and reattaching it is hilarious. Even though the Oswald cartoons are 90 years old, they have a freshness to them that defies their age because of those inventive animation gags.

The other aspect that I found intriguing about Oswald was the fact that half of the 26 Walt Disney-created cartoons made were missing—completely lost with no apparent film prints known. When Oswald was repatriated back to The Walt Disney Company, there were only 13 titles that had known film prints. The rest were classified as lost, and locating those lost cartoons presented itself as an appealing challenge.

There is a misunderstanding that Walt Disney lost the rights to Oswald, but that is not true. Walt never owned the rights to Oswald, he was merely a contractor—a pencil for hire. What he lost was the contract to create more Oswald shorts. Oswald was created at the request of his producer, Charles Mintz of the Winkler Film Corporation, and their distributor Universal. Walt and his top animator, Ub Iwerks, created Oswald. The first theatrical release was Oswald the Lucky Rabbit in “Trolley Troubles” and it was an instant success.

Even with that success, Walt and Mintz had a frosty relationship. Mintz frequently criticized the cartoons and admonished Walt on the quality of the films. For his part, Walt was constantly under financial pressure and looking for ways to save on cost as well as pushing Mintz for more money. Ultimately, Mintz thought that Walt was unnecessary and he could set up his own studio of animators for the second order of 26 Oswald cartoons.

Not only had Mintz set up his own studio, but he had hired away most of Walt’s animation staff. The fine print of the Oswald paperwork gave Walt no ownership rights to Oswald. Mintz had a Universal contract, control over the character lay with Mintz. Walt had nothing.

While finishing off the Oswald obligation, Walt, his brother Roy O., and Iwerks (who had remained loyal) were working on a new character named Mickey Mouse, in secret behind locked doors at the Hyperion studio and at Walt’s and Roy’s homes on Lyric Avenue in Los Angeles. Walt wrote the story line for the first Mickey short, Plane Crazy (1928); it was inspired by Charles Lindbergh’s solo flight across the Atlantic Ocean to Paris. This was followed by Steamboat Willie (1928) and The Gallopin’ Gaucho (1928).

Steamboat Willie was the first Mickey Mouse cartoon released, with sound added, and was an overnight sensation. Mickey Mouse’s popularity quickly eclipsed that of the other animation fare of the day, including Oswald. Walt Disney turned a devastating setback into a triumphant success.

There is no question that Oswald the Lucky Rabbit is an important part of the early history and success of The Walt Disney Company. If Walt had not lost the contract for Oswald, he might never have created Mickey Mouse, who has become a ubiquitous symbol of the global pop culture—a cultural icon.

The story of Oswald is not over yet, there are still seven missing shorts to be found. In fact, one has been identified already. The other surprise was the re-discovery of a 27th Oswald short baring Walt Disney’s name as director on the title card. All of which is covered in detail in my new book, Oswald the Lucky Rabbit: The Search for the Lost Disney Cartoons.

David A. Bossert is an artist, filmmaker, author and a 32-year veteran of The Walt Disney Company. He is also a historian and is considered an authority and expert on Disney animation history. Bossert co-authored Disney Animated, which was named iPad App of 2013 by Apple and won a BAFTA award. He is also the author of several books including his latest, Oswald the Lucky Rabbit: The Search for the Lost Disney Cartoons (Disney Editions). You can learn more at www.davidbossert.com.