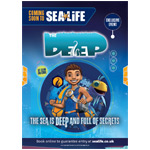 Technicolor, Merlin Get ‘The Deep’ S2 Off to Swimming Start with Aquarium Events

Technicolor has inked a cross-promotional agreement with Merlin Entertainments Group — a worldwide leader in branded, location-based family entertainment — to bring interactive experiences inspired by animated underwater adventure The Deep at over 20 Sea Life aquariums throughout the UK and Germany, timed to the show’s Season 2 debut and new mobile game from DHX Interactive.

The events kicked off this weekend in the UK, and will continue through November at multiple locations, with the German market events launching in October. At participating Sea Life sites, kids will be invited to solve the secrets of The Deep by exploring the aquarium zones for clues to become a Junior Nekton.

“When fans connect with a property as they have with The Deep, they want to be involved in it across many areas,” said Pam Kunick Cohen, Head of Brand Management, Licensing and Merchandising, Technicolor. “We can’t think of a better way to kick off the show’s new season and get fans engaged with the brand in an authentic way than with our promotion at Merlin Entertainments’ Sea Life aquariums.”

Coinciding with the events and Season 2 launch, DHX Interactive has released the show’s first mobile game extension. The Deep: Sea of Shadows launched in the App Store and Google Play last week in multiple territories, in both English and German. The action-adventure game asks players to help the Nektons unravel the mystery of a strange dark ink corrupting the sea.

“The underwater adventures of The Deep continue to thrill kids and families, and we’re delighted to be a part of the show’s global success,” said Ken Faier, SVP and EP, Content at DHX Media. “We’re confident that these new Sea Life entertainment experiences, coupled with the release of the first mobile game, will keep audiences wanting more of The Deep‘s Nekton family.”

Technicolor is the underlying rights holder to The Deep, a co-production between Australia-based A Stark Production (scripts, design, music) and Canada-based DHX Media (animation, voices, post- production), and has oversight for the brand overall. The series is based on the award-winning graphic novel series by writer Tom Taylor and illustrator James Brouwer, who serve as series co-creators.

With the mission of providing “Amazing Discoveries,” Sea Life is the world’s biggest aquarium brand, with locations across the UK, continental Europe, North America and Asia Pacific.