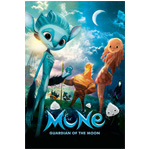 A wondrous and magical visual feast is getting the big-screen treatment stateside thanks to distributor GKIDS and cinematic event partner Fathom Events, which have announced the US theatrical debut of Mune: Guardian of the Moon. The French feature (from the producers of The Little Prince) will screen one day only on Saturday, August 12 at 12:55 p.m. local time.

Synopsis: As legend has it, the first Guardian of the Sun threw a harpoon into the cosmos and roped the sun to bring light and warmth to all of humanity. Then the Guardian of the Moon lured the moon to the Land of Darkness to provide a balance to the sun and supply the world with dreams. At a ceremony to appoint the two new guardians, an accident seems to occur: the heir apparent is passed over, and the title of Guardian of the Moon is bestowed on the waif-like creature, Mune, a small forest faun who is unprepared to take on such a weighty responsibility. This news excites Necross, the nefarious ruler of the Underworld, who decides to prey on Mune’s weakness and steal the sun for himself. Now it is up to unlikely hero Mune and his friend Glim to save the sun and restore order to the world.

“This is a magical, hugely entertaining, absolutely stunning film that has been wowing audiences young and old on the festival circuit,” said Eric Beckman, GKIDS CEO. “Now families and fantasy film lovers across America will get a chance to see it in theaters.”

Directed by Benoît Philippon and Alexandre Heboyan, Mune: Guardian of the Moon was produced by On Animation Studios, Onyx Films, Kinology and Orange Studio, and features a soundtrack by Bruno Coulais (Coraline, Song of the Sea). The film was nominated for the Annecy Cristal, and won the Young People’s Jury Award at TIFF and Best Feature at the Tokyo Anime Awards.

Originally released in France in 2014, Mune will make its US debut with a new English-language version featuring the voices of Rob Lowe (Sohone), Christian Slater (Leyoon), Patton Oswalt (Mox), Ed Helms (Spleen) and Jeff Dunham (Phospho). The program also includes GKIDS MINIFEST a super-fun, super-condensed festival of the best short animation from around the world.

More than 350 theaters are set to participate, which can be found at FathomEvents.com. Tickets can be purchased at the Fathom Events site and MuneMovie.com.

GKIDS and Fathom are also presenting the six-part Studio Ghibli Fest running in US theaters this year.