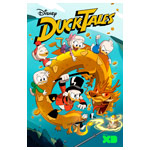 Disney XD’s new take on the classic animated series DuckTales will kick off its run with an hour-long premiere movie airing on the channel for 24 consecutive hours Aug. 12, with the series debuting with two episodes premiering Sept. 23.

The premiere date of the movie — titled “Woo-oo!” — was announced on Facebook today along with the series’ title sequence and a new version of the classic theme song. The theme is written by Mark C. Mueller, the song is performed by singer/songwriter Felicia Barton (Dancing with the Stars) and produced by Emmy Award-winning Michael ‘Smidi’ Smith (Coldplay, Sia, Britney Spears) and composer Dominic Lewis (Rough Night, Fist Fight). It will be released June 23 by Walt Disney Records.

Here’s a look at the sequence: