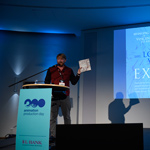 Loving Vincent‘s UK-Polish writer-director team Hugh Welchman and Dorota Kobiela will return to the world of painting for their next animation feature, The Shadows, which Welchman pitched to potential co-production partners at this year’s Animation Production Day (APD).

Speaking exclusively to Animation Magazine on the sidelines of the APD’s financing market, Welchman recalls about the production of Loving Vincent that “quite a lot of scenes [were at] night because many elements of Vincent’s life were quite nightmarish, and we had a lot of fun doing it. We called it Vincent Noir! Turning his paintings into night was something quite beautiful-spooky.”

“I was also writing screenplays for horror films during the production and could see that we could do something really scary and creepy,” he continues. “We have now been doing a lot of research into painters like Goya, Caravaggio and the followers of Caravaggio himself. There was a whole movement – my favourite being the painter who called himself ‘The Candlelight Master’ because all of his paintings are set at night. So, our aim is to come up with a supernatural horror thriller and to paint it in this dark and moody style.”

Welchman says that “his ideal set-up” for the €5 million production would be a two-party co-production.

“We want to do all the painting in Poland, while the live-action shooting, the sound and the music and maybe part of the visual effects could be done in the partner country.”

Loving Vincent will have its world premiere in Annecy in June, followed by presentations at the festivals in Shanghai, Moscow, and Melbourne, and the  Polish premiere at the New Horizons Film Festival in Wroclaw where some of the film’s oil paintings were made.

Sales agent CMG is close to putting up the “all sold out” sign, with deals now only to be finalized for distribution in the USA, Australia and Germany.

Meanwhile, Welchman and Kobiela are currently putting a 500 square metre exhibition together for presentation at a museum in The Netherlands to coincide with the film’s theatrical release at several European territories this autumn.

Break Thru Films, the producer of The Shadows, was awarded the newly created Trickstar Business Award at ITFS on Friday evening.