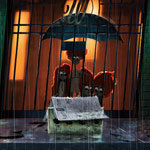 Canadian studio Bron Animation has signed on Emmy- and Golden Globe-winning series creator, writer and actor Ricky Gervais (Special Correspondents, The Office, Derek) to narrate its adaptation of The Willoughbys, Bron Animation President Brenda Gilbert announced Thursday. The film is based on Newberry Award-winning author Lois Lowry’s popular kids’ book, and is being written and directed by Kris Pearn, with Cory Evans co-directing.

“Ricky has such a distinctive voice and his talents will make an exceptional contribution to the edgy tone that we are going for with The Willoughbys,” said Brenda Gilbert. “We’re looking forward to Kris and Cory’s animated interpretation of this fun and popular story.”

Published in 2010, the story follows the four Willoughby children — Timothy; his twin brothers, Barnaby A and Barnaby B; and their little sister, Jane — who are abandoned by their oblivious parents and must learn how to adapt their “Old Fashioned” values to the contemporary world in order to create something new: The Modern Family.

The Willoughbys is now in pre-production at Bron’s studio in Burnaby, BC, with Bron’s Brenda Gilbert, Aaron L. Gilbert and Luke Carroll producing. Gervais is also an executive producer on the project. Additional casting is currently underway on the film, which is being repped by WME.

Writer-director Kris Pearn has a long list of story and design credits, including feature films Open Season, Surf’s Up, Shaun the Sheep Movie and The Pirates! Band of Misfits. He was head of story on Cloudy with a Chance of Meatballs and co-directed the sequel. Pearn has also published comics and kids’ books like Edward the Tree Climbing Dog and Project Superhero (ECW Press). He is a graduat of Sheridan College’s Classical Animation Program.

Co-director Cory Evans began his 15-year career as a 2D animator for DreamWorks Animation, and has since worked across film and TV as an animator, character designer, layout artists and storyboard artist. His most recent role is as Head of Story on Bron’s upcoming Henchmen. Evans has also taught animation for over a decade.