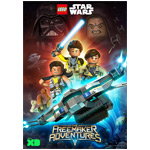 A second season of galactic adventure is coming this summer as LEGO Star Wars: The Freemaker Adventures returns to Disney XD.

“The series creators expertly deliver an equal amount of comedy and signature Star Wars adventure into their storytelling,” said Marc Buhaj, SVP, Programming and General Manager for Disney XD. “We’re looking forward to bringing our viewers a brand new season of galactic adventures with the Freemaker family throughout summer.”

The first season concluded with the Freemaker family finding a new home with the Rebel fleet. Now, they came face to face with Imperial forces, desperate Hutts, conniving Sith Lords, and the Emperor’s new toy: a terrifying hunter droid named M-OC who constanty modifies himself to pursue any quarry. With new threats abounding, Rowan’s powers grow until he has a vision of an invulnerable ship that can save the Rebellion and stop the Empire — the Arrowhead. The catch? Young Rowan’s the only one who can build it.

Ahead of the debut, five new shorts that fill in the gaps between seasons 1 and 2 will air on Disney XD on May 4 as part of the “May the 4th Be with You” fan festivities. A peak at the new Freemaker Adventures will also be revealed at Star Wars Celebration in Orlando this month.

Season 1 was one of Disney XD’s top-rated animated series in 2016, reaching over 55 million Total Viewers across the US to-date (including 21M kids 2-14 and 11M boys 2-14), plus 6 million engagements across digital and social.