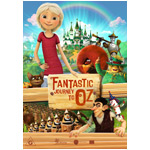 Just ahead of its presentation at the European Film Market in Berlin, Russian animation studio Melnitsa and distribution partner Wizart have released a brand new trailer for Fantastic Journey to Oz — an animated feature based on the children’s stories written by Alexander Volkov and set in L. Frank Baum’s magical world.

Inspired by the 1963 book Urfin Joos and His Wooden Soldiers, Fantastic Journey to Oz unfolds as the cunning and wicked Urfin plots to rule Magic Land, capturing the Emerald City with his army of wooden soldiers and renaming it “Urfinville.” But his devious plans can’t last, as Dorothy returns to Magic Land just in time to help the Scarecrow, the Tin Man and the now-brave Lion save their home by uncovering Urfin’s true identity.

“For a full-length animated feature film, it is highly important to create a simple family story to strike a chord with audiences all over the world. In this field, innovative technologies just help us to meet creative challenges and make the film more exciting and spectacular for the audience. The movie tells us about simple morality and values close to everyone,” said Konstantin Bronzit, an Academy Award nominee (We Can’t Live Without Cosmos) and Fantastic Journey to Oz creative producer.

Wizart’s distribution division is handling international sales for Fantastic Journey to Oz, which has already been picked up by Shooting Stars (Middle East), BestFilm (Baltics), and distributors in Bulgaria, Australia, UAE and South Korea. Zylo in France has acquired home entertainment rights to the film for France, Belgium, Switzerland, Monaco, Andorra and Luxembourg.