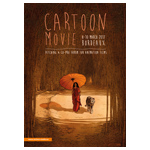 The Belgian region of Flanders will be a guest of honor at this year’s Cartoon Movie feature animation confab, taking place March 8-10 in Bordeaux, France. About a dozen animation production companies from Flanders will present themselves during the spotlight event “Flandriens of Animation,” a reference to the do-or-die racing cyclists of the region. Three Flemish projects and five co-productions from Flanders are among the year’s 55 selected pitch projects.

Presenting during “Flandriens of Animation” will be:

Lunanime, a 2D focused studio which has contributed to films like A Cat in Paris and Phantom Boy, and has in the pipeline co-productions including Funan, Tulip, The Siren and I Lost My Body.

Thuristar, creator of the hit short film 850 Meters and co-producer of the spin-off TV series My Knight and Me, is currently developing TV projects Roger Flambé: (Animated) Actor and Mush-Mush and the Mushables, as well as the feature film Mêh, Sheep in Wolf’s Armor.

Walking The Dog — and indie studio which boasts feature credits on The Congress, A Monster in Paris and Jack and the Cuckoo-Clock Heart — is currently working on Another Day of Life, and co-productions Hieronymus, Hump and Charlotte.

Tondo Films, producer of the WWI film Cafard, has teamed up with director Jan Bultheel again for his second feature based on European history, Canaan, which will be pitched at Cartoon Movie.

In addition to Canaan, Flanders (co-)productions in the pitch sessions will include Crazy Island from Grid Animation (co-producer, Ooops! Noah Is Gone…), which is also in development on Troll and the Oliver, Marnie’s World and Harvie and the Magic Museum. Potemkino and SANCTA will be pitching the third Flemish project, ZOOks.

The spotlight on Flanders is organized by the economic fund Screen Flanders, an initiative under the aegis of Flemish Economic Affairs Minister Philippe Muyters and Flemish Cultural Affairs Minister Sven Gatz, in co-operation with Casa Kafka Pictures, Galaxy Studios, t-theater, Ketnet, Creative Europe Media Desk Flanders and the General Representation of the Government of Flanders in France.

Flanders is home to more than 20 animation production companies, 10 of which have their own studios, which have released 11 feature films and 12 series (including minority co-productions) between 2013 and 2016, and now have 25 features and 30 series in the works for 2017-18. Last year, the Flanders Audiovisual Fund (VAF) / Film Fund gave over 2.1 million EUR to 22 animated projects (including co-pros), while the VAF / Media Fund provided 1.26 million EUR to 11 animated series.

Screen Flanders, which supports audiovisual productions that spend part of their budget within the region, provides an annual average of 912,000 EUR to animation projects. And an additional average of 14 million EUR in private investment flows into animation every year from Flanders, thanks to the Tax Shelter Incentive.