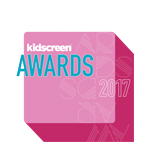 Hosted by comedian Darrin Rose and sponsored by the Canada Media Fund, this year’s honorees were determined by two panels of industry judges. In the Best Animated Series categories, the winners were Doc McStuffins and Sarah & Duck (Preschool), We Bare Bears (Kids) and Bob’s Burgers (Tweens/Teens, also Best in Class).