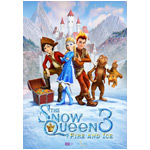 Things are really heating up in Wizart Animation’s hit fantasy animation franchise! A new trailer has dropped for The Snow Queen 3: Fire and Ice, rolling out worldwide on December 29, packed with pirates, trolls, elemental magic and mechanical mishaps.

Directed once again by Aleksey Tsitsilin, the third feature sees the young heroes Kai and Gerda in a whole new world of trouble as they must team up with their troll friend Orm, a bold lady pirate named Alfida and a new ally named Rollan to save the world — again.

The screenplay is written by franchise veterans Aleksey Zamyslov, Tsitsilin, Valdimir Nikolaev (Snow Queen 1 & 2, Sheep and Wolves) and Robert Lence (Beauty and the Beast, Valiant), with music from composer Fabrizio Mancinelli. The Snow Queen 3 is produced by Yuri Moskvin and Vladimir Nikolaev.

Building on the success of the first two films, The Snow Queen 3 will have simultaneous theatrical openings in Russia, Estonia, Lithuania, Latvia, South Korea, Poland, Romania, Bulgaria, Cypress, the UAE and Turkey just in time for the New Year holiday.