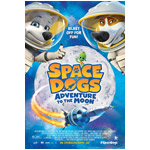 Epic Pictures will be bringing Space Dogs 2: Adventure to the Moon to over 50 AMC, Megaplex and Ultra Star theaters across the U.S. beginning August 26, according to Russian-language movie news site ProfiCinema and Russia Beyond the Headlines. The release coincides with Dog Appreciation Day.

Produced by KinoAtis and originally released in 2014, Space Dogs 2: Adventure to the Moon is the follow-up to the hit CG animated adventure inspired by the true story of the first canine cosmonauts, Belka and Strelka, who spent a day in orbit on Sputnik 2 in 1960. The sequel’s English version is directed by Mike Disa (Hoodwinked Too!, Postman Pat: The Movie).

Visit the film’s iTunes page to watch the trailer.

Blast off for fun! Join an all-star cast including Alicia Silverstone (Clueless) and popstar Ashlee Simpson on an out of-this-world adventure. Pushok, a pup astronaut is on a mission to find his father who is trapped on the moon! Defying all odds, Pushok blasts off on a rocket to rescue his family but quickly finds he’s not alone as he crosses paths with a macho monkey and a tiny green alien. Can Pushok save his family? Will this be mission impawssible?