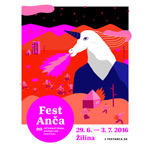 “The winning film creates and recreates its own narrative and visual space with inventiveness and constant surprises. Beguilingly simple in its visual design, it engages the viewers with its quirky atmosphere, but also the very personal feelings of the main character, hidden under a fly’s wings.”

The film depicts a small village in a plain and arid region of central Spain, where an old woman tries to bring her late husband back by means of twisted rituals.

Special mentions were also awarded to Celine Devaux’s Sunday Lunch (for its “very personal story that metamorphoses into the most interesting Sunday evening, with the protagonist being devoured by his family, the cosy monochromatic backgrounds, and the menacing sound design”) and Samuel Yal’s Noevus — a fascinating dialog between the art forms of sculpture, dance and animation.

For the local competition, the Anča Slovak Award along with 600 euros in prize money — supported by the Slovak Literary Fund — was awarded to Marta Prokopova’s Mila Fog. “The film brings a subtle associative story that gives us a space for interpretation and creative participation. The combination of different visual styles and their transformation comes very naturally and fluently. The magnetic visuals, together with a bold and fascinating sound design, bring an essential experience to the audience. The high confidence of the director’s decisions about all of the film’s elements and the timing of it led to a wholesome piece of art.”

The jury awarded a special mention to Zuzana Žiaková’s Brother Deer “for her mastery of classical stop-motion puppet animation in the film, which presents a traditional tale combined with surreal elements.”