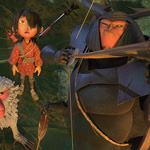 LAIKA has found unexpected success in the seemingly old-fashioned medium of stop-motion with its features Coraline, ParaNorman and The Boxtrolls — none of which it takes for granted as it prepares to release its fourth feature, Kubo and the Two Strings.

“We want to tell new and interesting stories,” says Travis Knight, LAIKA’s CEO and director of Kubo, which arrives in theaters Aug. 19 via Focus Features. “Animation is such an incredible visual medium, but it hasn’t been harnessed to tell lots of different kinds of stories. By the time I shuffle off this mortal coil, I want to hit a story in basically every genre there is.”

Kubo’s story certainly fits that bill. Set in Japan’s past, the movie follows a young boy with a unique storytelling talent who rescued by his mother from family treachery and has to come to terms with his heritage while seeking a magical suit of armor needed to defeat a unique enemy. A fantasy story that’s hard to categorize, Kubo and the Two Strings delivers a rare-for-stop-motion scope in its sweeping story, delivering what is arguably the Portland, Ore.-based studio’s best movie to date.

“We think we’re breaking new ground,” says producer Arianne Sutner. “We have a primarily exterior movie but at its core, it’s really an intimate family story.”

The project has been in the works since ParaNorman was still in production, says Knight, who moves up from lead animator to making his directorial debut on the movie.

“There’s something on the surface of it that’s incredibly compelling for me,” he says.

The primary draw was a story that evoked the big, epic movie fantasies he loved as a kid — films made by the likes of George Lucas, Steven Spielberg, Akira Kurasawa and David Lean — and the challenge of doing it in stop motion.

“What really got me excited about this film was what was at the emotional core,” he says. “The story of this boy and his family and ultimately what becomes of his surrogate family just deeply resonated with me, personally. There’s a lot of me in this movie and the more we developed it and the more I took on the more you just infuse your own personality and your own experiences into it.”

Reeling in the Story

Working off a story by Shannon Tindle and Marc Haimes and screenplay by Haimes and Chris Butler, the studio was able to build upon its experience with previous movies to develop and plan the movie so it would work, Knight says.

“We had an excellent set of reels that evolved over the course of the film, as they always do, but the basic thing was there right from the start, so we were able to schedule it in such a way that it made sense because we all fully understood what we were making right at the beginning,” he says.

“It’s a fantasy tale that’s a bit recreated, so we’ve been able to draw from all different time periods of Japanese history and culture,” she says.

Textures were based on the work of the famous Japanese woodblock print artist Kiyoshi Saito, forming the base for the costume designs, which were overseen by Deborah Cook.

All the human characters wear kimonos, many of which had to be weighted down to give the proper draping, says Hayns. Human hair combed through with silicone to give it more of a matte look was used for the wigs.

The non-human puppets posed their own challenges. Beetle looks like an origami samurai, and was the first LAIKA character built with an exoskeleton. “We had to allow the internal hard parts to ride over the internal skeleton,” says Hayns. “There’s a soft foam core that sits around the armature and then all of these breast plates slide over the top of the material.”

Beetle’s armor itself is made of Tyvek, which looks like paper but can’t be torn. Those properties, however, made it difficult to paint, requiring a number of techniques including roughing up the surface, dying and spray paint to color it.

Monkey was another difficult character, as LAIKA’s first fully furred puppet, Hayns says. “We approached it more like a live-action body suit,” she says. “We built her armature and we built on top of it a muscle suit … and then we covered the muscle suit with a fur fabric suit.”

As with human hair, the fur-like coat was combed through with silicone to create a stylized effect that was easy to animate and avoided chatter.

The sisters — since they’re twins, they are portrayed with identical puppets differentiated by their choice of weapon — were all about the cape. Hayns says her team designed a cape that could transform into wings as the story called for and be used in every shot (save one) needed for the movie.

As on its previous movies, LAIKA made extensive use of 3D printing, also known as rapid prototyping. The Moon Beast character who appears for the climactic battle of the movie was a fully 3D printed puppet, says Brian McLean, director of rapid prototyping.

“Typically, we will 3D print parts of (a puppet), but we’ll end up casting it into silicone or something,” he says. “But everything you see (on the Moon Beast) is actually 3D printed and there’s over 848 pieces in this puppet, and that’s not including the internal armature that goes on the inside.”

The Moon Beast puppet was built to be about 30 to 36 inches long — a size that the animators said would be comfortable for them to work with as well as large enough to convey its large scale relative to the human characters and puppets, McLean says.

The final look of Moon Beast also relied heavily on visual effects, which in Kubo have stepped up to a new, larger role for a LAIKA picture, says Steve Emerson, visual effects supervisor.

For the Moon Beast, stop motion allowed for multiple shots of a single frame to get different lighting from a white light pass to a greenscreen shot to a shot using blacklight to illuminate invisible UV paint on the puppet itself.

“We can put all that in the computer and it respects the look of the original character design,” he says.

Additionally, visual effects were used for all the water effects, including an underwater sequence, and for set extensions to expand the scope of the world, Emerson says.

The shoot took about 18 months, with Sutner saying they try to schedule the production to avoid having the most difficult sequences bottleneck in the pipeline at the end.

Knight himself did a bit of animation on the film, but admits it was nowhere near as much as he had done on previous LAIKA movies.

With Kubo in the can, Knight says he knows what LAIKA’s next project is, as well as the most likely movies after that. The studio has about 10 things in development at any given time, and the studio is expanding its facility with an eye toward upping it production capacity so it can release one film a year instead of every other year.

Some of that is just planning and math, but the harder part of expanding is maintaining the intangible elements. “It’s always a challenge when you’re growing that the culture stays intact, that you’re not losing sight of why you started doing it in the first place,” he says.