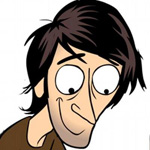 KLIK! Amsterdam Animation Festival has named award-winning cartoonist and animation director Dan Meth as its artist-in-residence for 2016. In this solemn duty, Meth will create animations and art for the fest’s social media platforms, and a collection of his work will be exhibited during the annual festival this October 25-30.

“We’re pleased to have Dan Meth join us here at KLIK! this year,” said Yvonne van Ulden, creative director. “Earlier this year Dan relocated from New York City to the Netherlands seeking new inspirations, and he wanted to get involved in the Dutch animation scene. His eclectic and colorful mix of the funny and bizarre perfectly fits with KLIK!’s fun and edgy approach of animation. With his experience in creating cartoons and memes that are infused with popular culture, Dan can use our social media platforms as a playground to experiment with KLIK!’s beloved characters and to promote animation’s diversity and broad appeal.”

Born in the suburbs of NYC, Dan Meth had a passion for drawing cartoons from a tender age, growing up to major in illustration at Syracuse University before pursuing an animation career. Graduating just as the world of internet video content was taking off, Meth established himself as a viral animated comedy master. In addition to his personal work like 39-episode series The Meth Minute (2007) and its spin-off Nite Fite, he has also worked on TV series including Comedy Central’s Ugly Americans and Nickelodeon’s Random Cartoons, and has been commissioned for illustrations by The New York Times, BuzzFeed and New York Magazine.

Meth is currently working on a sci-fi graphic novel epic, The Regolith, which you can read on Instagram @the_regolith as he goes. His custom work for KLIK! will be published on the event’s Facebook, Instagram, Twitter and mascot fan page. A collection of these works will be on display during the festival at EYE in Amsterdam.