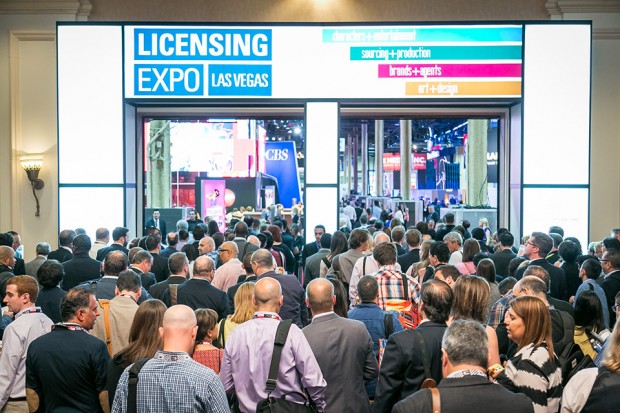 The power of animation properties as brands is on display in a big way as businesses gather June 21-23 in Las Vegas for Licensing Expo 2016.

Character and entertainment brands continue to be the hottest category in the licensing business, which will gather once again June 21-23 in Las Vegas for Licensing Expo 2016, the world’s largest and most influential licensing event.

The top 150 global licensors sold more than $262 billion in licensed merchandise this past year, with animation properties prominently represented on that list.

Topping the list of licensors is The Walt Disney Company, which sold more than $52.5 billion in licensed merchandise at retail, up $7.2 billion from the previous year, on the strength of its brands Star Wars, Frozen and Marvel.

Iconix Brand Group, which includes a portfolio of 37 brands including entertainment icons such as Peanuts and Strawberry Shortcake, reported $13 billion in annual retail sales of licensed merchandise. And Warner Bros. Consumer Products posted $6 billion in retail sales in 2015 thanks to the success of its DC Comics franchises, Harry Potter, Looney Tunes and Scooby-Doo.

Other animation-related licensors include Hasbro, with $5.9 billion in retail sales; Nickelodeon with $5.5 billion; NBCUniversal with $4.5 billion and DreamWorks Animation with $3.3 billion.

DHX Brands (Booth O236) heads to Licensing Expo with a diverse slate of properties headlined by Teletubbies, which has more than 65 top-tier licensees across the world; and preschool favorites Twirlywoos, one of the best-selling toy lines of the past year; and In the Night Garden, which recently announced the launch of a dedicated In the Night Garden baby product range, to hit retail in spring 2017.

Entertainment One (Booth G196) will unveil global licensing opportunities for its CGI animated preschool TV show PJ Masks, which is hotly tipped to be one of the next big preschool licenses. Peppa Pig will spearhead the licensor’s presentation slate which also includes preschool favourite Ben and Holly’s Little Kingdom in addition to two of the most anticipated summer movies for 2016; Steven Spielberg’s big screen adaptation of Roald Dahl’s The BFG and Ricky Gervais comedy David Brent: Life on the Road.

Genius Brands International (Booth A196) returns for a second year to Licensing Expo to introduce two all-new properties to the global consumer products’ marketplace: SpacePOP and Llama Llama. Spearheaded by GBI’s President of Global Consumer Products Stone Newman, the company will be seeking key licensing partners around the world for both brands.

Ink Global (Booth F204) will present: Masha and the Bear, a huge success on broadcast and online, where one clip has recorded more than 1 billion views; The Mojicons, a new show that reveals the behind-the-scene world of the internet, produced by Russian creators Alexander Romanetz and Viacheslav Marchenko; ZAFARI, the creation of animation visionary David Dozoretz and picked up by NBC Universal for global distribution rights; and The Fixies, a brand new animation that follows the adventures of the little creatures who, unbeknownst to humans, live inside machines, appliances and devices.

The Jim Henson Co. (Booth D196) will spotlight its vocabulary building show Word Party (26 x 11’ episodes), which debuts in July 2016 on Netflix in the U.S. and in territories around the world where Netflix is available; Dot, a new animated series (52 x 11’ episodes) targeting the bridge market of 4–7-year-old girls and due to air on Sprout in the U.S. in September; and Splash and Bubbles, an all-new animated series that will debut this fall on PBS KIDS in the U.S. and other platforms worldwide. Henson is developing a comprehensive global consumer products program for Dot and is seeking licensing partners in multiple categories for Dot, Word Party and Splash and Bubbles.

Licensing Works! (Booth F124) will introduce licensees to Millimage’s Molang brand and seek new licensing and merchandising partners in all key categories. Molang airs on Disney Junior and also can be viewed online at Disney Junior and is supported by a strong social media campaign found on Facebook, Twitter and Tumblr.

Saban Brands (Booth A159) returns to Licensing Expo with Popples, a Netflix original series for kids vased on the popular 1980s toy line and television series and accompanied by a full consumer products program, with Spin Master serving as global master toy licensee;  Glitter Force, a Netflix original series based on Japan’s longest-running and most successful girl franchise, Pretty Cure; Cirque Du Soleil – Luna Petunia, an original preschool property that will debut as a Netflix original series for kids this fall and kick off a full franchise rollout, including a comprehensive consumer products line; and Power Rangers, supported by the 23rd season for the iconic superhero franchise airing on key broadcasters across the world.

Spiffy Pictures (Booth M242), creators of the new hit animated PBS KIDS series Nature Cat, is showcasing a host of licensing opportunities for kid-friendly products based on the award winning educational series With HiHat Media handling brand licensing for the U.S. and 9 Story Media Group, Inc. running international distribution and consumer products rights outside of the U.S., the brand will be supported by comprehensive consumer product platforms that inspire children to develop connections with the natural world.