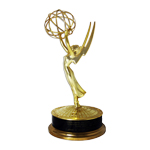 This year’s Lifetime Achievement Award was presented to prolific voice actor Frank Welker, best known as the voice of Megatron in Transformers and as Fred Jones in Scooby-Doo. (Also appearing onstage as presented were Bob Bergen, the voice of Porky Pig, and Reid Scott of Turbo FAST.) It was an sparkling night for animation all in all, with the winners representing the diversity of stories and styles on today’s screens.

By studio, DreamWorks Animation Television was the clear leader, earning five awards for its popular Netflix original series The Adventures of Puss in Boots, Dinotrux, All Hail King Julien and Dragons: Race to the Edge.