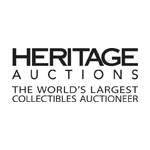 This year marks the 50th anniversary of Dr. Seuss’ How the Grinch Stole Christmas, one of the most beloved animated TV holiday specials of all time. To help the mean green machine celebrate his Golden Anniversary, the family of animation legend Chuck Jones is releasing a treasure trove of original artworks from the special, to be auctioned by Heritage on June 11, 2016 in Dallas.

“Dr. Seuss’ How The Grinch Stole Christmas has been on TV every holiday season since it was first released in 1966 and TV Guide ranked it #1 in its Top 10 list of holiday favorites,” said Jim Lentz, Director of Animation Art Auctions at Heritage Auctions. “This is an unprecedented offering and, more importantly than anything else, it comes directly from the Chuck Jones Personal Archives, chosen specifically by Jones’ daughter, Linda, and his grandson Craig Kausen.”

On offer will be 27 original pieces related to the development and making of Grinch. The rarest gems are three Key Master Set-Ups from the landmark cartoon, original artwork by Chuck Jones and Maurice Noble used in the production process, and a goodly number of original Chuck Jones Grinch paintings. A portion of the proceeds will benefit the Chuck Jones Center for Creativity in Orange County, California.

An individual stand-out of the auction, says Lentz, is a hand-painted production cel of the Grinch looking into a hand mirror held by his dog Max as he completes his Santa costume. This cel is on Key Master hand-painted production background from the scene, of which there was only one made and used in production. This item is estimated at $25,000+.

Other highlights are one of the earliest drawings of the Grinch by Jones to ever appear at auction, accompanied by one of the first hand-painted Grinch cels (est. $10k+); a very rare storyboard of Cindy Lou Who with early character design ($5k+); rare pan hand-painted Master Key background of the snowscape ($5k+) with two sequenced production cels of the Grinch on his sled; and a 12 field director’s layout drawing by Jones of the Grinch trying to save the sleigh ($5k+).

Check out The Art of the Grinch Animation Art Auction on Heritage’s website.