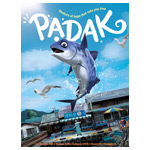 eigoMANGA’s ‘Padak’ to Debut on Steam

San Francisco-based digital media publisher eigoMANGA reveals that its animated feature film Padak will be launching as a streaming title on Valve Corporation’s Steam platform, beginning June 6, 2016. A special promotional price will be offered for a limited time.

Padak is a CG-animated feature film from independent South Korean studio E-DEHI, written and directed by Lee Dae Hee. The story revolves around the lives of fish in captivity at a seafood restaurant, as some try to swim against the current of their fate, while others go with the flow. Padak has picked up awards from international film festivals in Vladivostok, Jeonju and the Seoul International Cartoon & Animation Festival.

Steam is a leading content platform offering thousands of titles from both Valve and other indie producers to its millions of members, currently available in 237 countries and in 21 different languages.