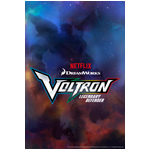 DreamWorks Animation pulled back the curtain and unveiled some of the details of its upcoming Netflix Original Series, Voltron: Legendary Defender at WonderCon in L.A. over the weekend. This included a special sneak peek at the new 13-episode series and the premiere date announcement, with the rebooted toon set to debut June 10.

“As children of the ’80s who grew up with Voltron, what was there not to love? You had 5 awesome lions, piloted by 5 awesome heroes who combined to form a giant, sword wielding Titan!,” say Dos Santos. “It unapologetically married Sci-fi and Fantasy in one incredibly over the top, bombastic package. Fans of the new series [Voltron: Legendary Defender] can look for us to keep all those elements, but also expect a much more fleshed out universe with a rich backstory and characters who will evolve over the course of the series.”