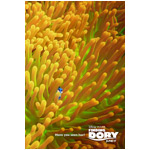 A new set of posters released by Disney-Pixar for upcoming sequel Finding Dory (out June 17) issued a spot-the-star challenge via Twitter on Tuesday. The four posters featuring a shy Dory in different lush underwater scenes were Tweeted out by Ellen DeGeneres, who reprises her role as Dory for this outing, and major theater chains Cinemark, AMC and Regal with the hashtag #HaveYouSeenHer.