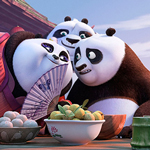 A Third of Firsts

Kung Fu Panda 3 has a lot of firsts: new characters, including Po’s long-lost biological father, new villains, a new co-director and a new way of working directly with a production team in China itself.

Hitting theaters Jan. 29 from DreamWorks Animation and 20th Century Fox, Kung Fu Panda 3 sees the return of Po, voiced by Jack Black, who meets his biological father, Li, played by Bryan Cranston, and faces a threat from the spirit world in the form of the chi hoarding bull Kai, voiced by J.K. Simmons.

The movie builds on the considerable success of the first two films. Kung Fu Panda was released in 2008 and grossed $631 million worldwide; Kung Fu Panda 2 — the first major studio animated feature directed solely by a woman, Jennifer Yuh Nelson — topped that in 2011 with a $665 million worldwide gross, of which $500 million came from overseas markets.

For the third installment, Yuh Nelson returns, having asked Panda franchise veteran Alessandro Carloni to direct with her.

Yuh Nelson says she chose Carloni because he’d been there from the beginning. “Over the past 12 years that we’ve been working on these films, we’ve been collaborating, we’ve been working together, and I got promoted from the head of story from the first film, so why not have Ale move up into director for this film?” she says. “Ale has been such a help to me, because he brings a design sensibility to things that are different from mine, but very complementary.”

“I think this movie became bigger than we all expected,” Carloni says. “It came down to the fact that she wanted me on board; that I was someone that with her have collaborated on creating these characters in the first movie and she wanted someone like me on board.”

Across the Board Integration

The collaboration saw each department have a few artists from Oriental DreamWorks, to spread out their contributions to the film and give each area access to their expertise.

That was helpful as the movie’s complexity and scale surprised even franchise veterans.  “We have an entire panda village; we had a huge set, which was the spirit realm; we had many, many, many characters,” says Nelson. “We also had a co-production, which was working across three different countries. So the challenge is making sure this is an epic, worthy story for a franchise that everyone is familiar with. We want to make sure it’s true to everybody, but also to give them more, so that it doesn’t feel like more of the same.”

With any narrative medium, finding the right story is key, and the idea of Po meeting his biological father was enticing from the start. Played by Bryan Cranston, Li clearly thinks and acts almost exactly like Po. “We wanted to make sure that this character was extremely successful,” says Carloni. “If the audiences didn’t truly fell in love with this guy we knew we would have a hard time with this stranger coming in and taking Po away from everything he loves. And so making him truly likable was a really important challenge for us and I think what really helped us was Bryan Cranston and his charisma. He helped us figure out who this character was personality wise.”

Li started out as more of a stern, disapproving father figure, but the filmmakers found that didn’t work as well as expected.  “It’s kind of straight out of some sort of screenwriting exercise,” says Yuh Nelson. “But the problem is you don’t like Li because all he does is squash Po’s fun and that’s not a fun dynamic to watch.”

Cranston took the idea and ran with it. “The idea that father and son could be more similar than different suddenly broke this dam for us and when Bryan got ahold of that character, all of a sudden his body language changed into this big body fun kind of guy. He stuck his stomach out when he was working on it,” says Yuh Nelson.

That translated well for the animators and worked better for Po’s character. “His whole life he was the different one, he was this silly goofball surrounded by straight-laced masters of kung fu,” says Carloni. “Why not give him a partner, give him someone like himself to give him the extra push toward the fun that he always wanted to have.”

Also new to this feature is Kai, voiced by J.K. Simmons, who collects the chi of past kung-fu masters to enable his return from the spirit realm and conquest of all of China. Despite his power and undeniable menace, Kai took a turn toward comedy in development.

“We wanted to create a little bit of insecurity and show a little bit of a bitter side of this character — that his legacy was tarnished by Oogway, and people didn’t know who he is,” says Carloni. With Simmons’ performance amplifying those elements, the character became a hit in test screenings. “He’s a character that you can relate to — this guy is broken, this guy is bitter — and he became much more fun to write for,” he says.

Yuh Nelson says the co-production arrangement made some elements of the production easier while making a Mandarin version added some new difficulty to the process. “That was certainly complicated because you’re making two movies, and two different tracks,” she says.

The Mandarin version had its own voice director — “We are not qualified to sit there and listen to say a Mandarin joke and say that’s funny because we don’t speak Mandarin,” Yuh Nelson says — and its own pipeline. The movie is not a direct translation but one that was adapted for the comedy in particular to work in Mandarin. Carloni says the China pipeline was set up differently and dealing with managing and scheduling it all was a real challenge.

But having access to native Chinese artists was a huge plus. “Art is a very universal language in that sense,” Carloni says. When it came to artists, just discussing the beauty of something or an inspiration, it was similar. They might have been in Burbank as much as in Shanghai. There was no difference.”