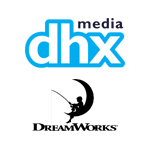 DHX Media and DreamWorks Animation have entered into a five-year agreement to co-produce 130 episodes of original animated children’s content at DHX Studios.

Content under the deal will air on DHX Television’s suite of channels, which includes Family Channel, Family Jr., Family CHRGD and Télémagino. DHX will handle distribution for the content in Canada and DWA will distribute to the rest of the world.

In addition, DHX Media has licensed more than 1,000 half-hours of television programming from DreamWorks Animation to be broadcast beginning as early as June across DHX Television’s channels. DHX Television will thus become the exclusive television network for this DreamWorks Animation television content in Canada. Series coming to the network include All Hail King Julien, The Mr. Peabody & Sherman Show, Dragons: Race to the Edge, The Croods, and many others.

DHX Media has also entered into an agreement with AwesomenessTV, which is majority owned by DWA, to license 300 half-hours of teen content for exclusive broadcast in Canada on Family Channel.