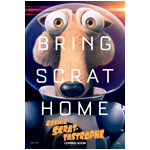 The latest short starring Blue Sky Studios beloved sabertooth rodent bowed in theaters this weekend, but now you can enjoy Cosmic Scrat-Tastrophe online thanks to 20th Century Fox. The short is meant to whet appetite for the next Ice Age installment, Ice Age: Collision Course, arriving in standard and 3D theaters on July 22, 2016.

In Cosmic Scrat-Tastrophe, Scrat journeys where no Ice Age character has gone before. The consequences of his antics are always momentous, and this time he’s creating his own version of the Big Bang. The short is running in theaters with The Peanuts Movie.