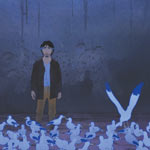 Kahlil Gibran’s The Prophet is one of the most popular books ever published; its 26 poems on the human condition and finding peace in life have been cited, quoted and used in countless wedding ceremonies since in its 1923 publication. Adapting the work into a movie has always been challenging, given the slimness of the narrative the Lebanese writer used to connect his poetic observations and the abstract nature of his themes.

But animation has provided a unique solution to that problem, and the result arrives Aug. 7 for a limited release in U.S. theaters via GKIDS as a feature that includes segments animated by some of the most renowned independent animators in the world.

Spearheaded as a passion project by actress and producer Salma Hayek, Kahlil Gibran’s The Prophet was conceived by producers Clark Peterson and Steve Hanson along the lines of Walt Disney’s 1940 musical classic Fantasia. Roger Allers, whose directing credits include The Lion King and Open Season, oversaw the overall adaptation and wrote and directed the framing sequence, while segments on the individual poems were animated by Paul and Gaetan Brizzi, Joan C. Gatz, Mohammed Saeed Harib, Tomm Moore, Nina Paley, Bill Plympton, Joann Sfar and Michal Socha.

The project was several years in the making before production kicked off with the arrival of Allers, who said adapting the book was an opportunity he could not pass up.

“The book meant a lot to me in college and I didn’t want to let it get away,” he says. “I had no idea how I was going to adapt it at all, I just knew I had to do it.”

Adapting Gibran’s book was far from an easy task, says Allers. The story in Gibran’s book is slim, consisting solely of a beloved man who is ready to return to his home country and speaks on various topics to the people he sees on his way to the ship.

Allers fleshed out that idea to make Gibran’s hero, Mustafa, an artist under house arrest who is being allowed to return home. Cared for by a woman who comes to clean his house and her curious and rebellious daughter, Almitra, the guards arrive to escort him to the port and he makes stops along the way to say goodbye and speak to people, leading into the individual animators’ segments. The voice cast includes Liam Neeson as Mustafa, Hayek as Kamila, Quvenzhene Wallis as Almitra, John Krasinski as Hayim, Alfred Molina as Sergeant and Frank Langella as Pasha.

“It was really about honoring what (Gibran) had, but expanding it so that there would be a narrative that would help the movie audience travel through all these poems and travel through the film,” he says. “I read as much about Gibran as I could and went back and dipped into the poems and started asking myself questions about Gibran’s hero, questions I feel he didn’t answer in his book, and that’s how it opened up.”

A New Point of View

Hayek’s involvement was considerable, as she suggested making Almitra a child to open up the movie to a young audience, Allers says. “She thought that a child’s point of view would help involve the young audience, as I said. She has a young daughter, so really, the Brizzis and I were quite inspired by the two of them (mother and daughter) to base our characters on them, story and design-wise.”

Meanwhile, the producers had spent years lining up and getting commitments from a dream team of independent animators.

“I was at a party at Ron Diamond’s house and Ron Senkowski, who is one of the producers on the project, said I’ve been looking for you and he mentioned this project,” says Gratz, who animated the segment on work. “It was one of those things that sounded like a great project and so nice to be able to do a short part of a feature film, which usually doesn’t happen, or you’re doing it in someone else’s style and so it was a unique opportunity to do a film in my style.”

The animators were asked which segment they would like to work on and were asked to submit storyboards, which was an unusual request in some cases.

“I am super independent and work on my own,” says Paley, best known for animating the feature Sita Sings the Blues. “I don’t do storyboards. I don’t do treatments. Because I work by myself, there’s a whole lot of intra-production work that I just don’t do. So the biggest challenge for me was making something digestible to an actual Hollywood production.”

Allers says he offered some notes at the start but kept it minimal. “The whole idea was to just let everyone do their work, be who they are and express their own vision,” he says.

“I picked the chapter on work because that was the one I most closely identified with, especially as an animator, where it’s so labor intensive,” says Gratz. “That was kind of a chapter that really spoke to me.

“Painting with clay” is how Gratz describes her technique, in which she creates images using modeling clay that’s been thinned with oil to make it workable like oil paint but without colors running together. “When I first started doing this technique, I was working with oils and everything would start out colorful and then as you mixed more and more stuff together everything turned out to be brown, so with clay you don’t have that same problem.”

Gratz typically improvises her work but decided to incorporate some imagery from Gibran’s artwork. “I really tried to incorporate as much of his own work as I could within that four-minute piece,” she says.

She spent six or seven months animating the four-minute piece, which she says is fast for her. “That’s the beauty of my technique, is no one else can do it,” she says.

Moore chose the segment on love and came up with a dance idea that he had to modify.

“I found out Joann Sfar was also doing something with dance, so I knew we could use it as part of our idea but we didn’t want to go completely based on the dance,” he says.

Moore says the crew hired a couple of dancers and videotaped their performance for reference, but ended up going for a more stylized approach.

He was working on the segment at the same time as he was directing Song of the Sea at Cartoon Saloon in Kilkenney, Ireland, which was stressful but also allowed him to tap into the talent assembled for the feature.

“It was a really intense period, but I didn’t want to miss a chance to be part of the project,” says Moore, who would spend mornings on The Prophet, then hand it off to his colleague Ross Stewart and move on to Song in the afternoons. “An awful lot of the artists who worked on it were people at Cartoon Saloon who were either coming off Song of the Sea or going on to the project afterwards, so it was quite nice that way.”

Typically for Moore, he tried to get some Celtic mythology into his pitch, with one version based more on transformation and using imagery of swans.

He also strived to put extra details into the segment, despite it being short. “We did a lot of experimenting to find ways to animate the background, to do stuff animated by hand and added in with the compositing software.”

Paley chose the segment on children and her original idea for a more metaphoric take was changed at the producers’ request to be more it literal. She settled on imagery from the poem of an archer shooting new lives as the main element and pulled imagery from the ancient Phoenician artwork at Levant for the visuals.

Since her segment also was set to music, she was sure to communicate with the songwriter to ensure the tune was animation friendly. “A lot of time, the beats will be every seven frames or every 13½ frames, so communicating directly with him he made into a nice beat that I could divide into 24 frames per second.”

Pulling all of this together was Allers, who decided to make his own sequenced grounded and earthy as a way to offset the stylization and colors of the poem segments. “I thought that we were going to need a visual rest in between,” he says. “It was like if these poems were dreams it would be like coming back to earth.”

He chose a traditional 2D approach and worked with the Brizzis, who storyboarded Allers’ segments in addition to directing their own segment in the film. Allers worked remotely via Skype with both his crew and with the other animators.

The animation was done at Bardel Entertainment in Vancouver, with CG technology used to complete the film within the limits of its schedule and budget.

“We started off doing it as a hand-drawn film with hand-painted backgrounds, basically. We kept the style, we kept the backgrounds but we shipped it to CG because of the time constraint and reinterpreted all these graphic character designs into 3D models,” Allers says. “And then it went through a process called toon shading where we would flatten them back out after they were animated and then have traditional animators go over that as well and refine and embellish. It was a very strange, hybrid technique and it was risky because none of us knew how it was going to turn out as well as it did it.”

The project nonetheless required a fair bit of improvisation, especially when it came to effectively integrating the various segments into a whole.

“Because we were developing all these things simultaneously, I didn’t know where some of my scenes were going to end,” Allers says. “You just had to figure things out in the moment.”

Despite the years of organizing and preparation, production moved quickly once it started. “From me sitting down and trying to come up with a concept to the last bit of post production, it was really only about a little over two years,” Allers says.

The final result has earned significant attention, including a preview last year at Cannes and a premiere at the Toronto Film Festival before its roll-out this summer to general audiences.

Allers says he hopes the movie works for readers already familiar with Gibran and opens up his work for a new generation that is unfamiliar with it.

The film itself, meanwhile, stands as a example of the maturity of animation and its ability to tell stories no other medium can in distinct individual styles that has an aggregate power surprising even to its creators.

“It ended up having a kind of emotional power that I don’t remember putting there,” says Paley. “I just put things in and it kind of said something and whatever it says was really bypassing my conscious mind.”