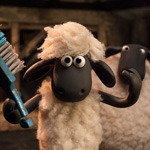 Shaun the Sheep Movie launches Aardman’s mischievous star on his biggest adventure yet, no baas about it.

Ever since launching his TV series in the U.K. back in 2007, Shaun the exceptionally clever sheep has been winning over audiences all over the world with his slapstick misadventures on the farm. Now, Nick Park’s charming little scamp has made his triumphant feature debut in Aardman Animations’ Shaun the Sheep Movie, opening in U.S. theaters August 5.

Directed by series veteran Richard Starzak and accomplished screenwriter Mark Burton (Madagascar, Wallace and Gromit: The Curse of the Were-Rabbit), the movie kicks off when another of Shaun’s schemes to shirk his boring chores goes awry, leading to an epic quest to shepherd his flock (and farmer) back to the farm from the bustling big city. In addition to the world-renowned stop-motion Aardman animation on display, Shaun the Sheep Movie is remarkable for having no dialog to help spur on the 85-minute adventure.

“[Richard] wanted to make a movie without any dialog … this sounded like such a crazy idea that I had to be a part of it,” says first-time director Burton. “It’s probably going to go really, really well or really, really badly. But, it felt like a really interesting challenge, particularly for a screenwriter.”

Starzak, who helped develop the Shaun series and served as a director and writer on the series, says he started “pestering” Aardman about turning it into a movie years ago. He and Burton decided early on they wanted to maintain the style of the show by using as little CG as possible, but they also knew that to take a seven-minutes series and turn it into a feature length film would require a strong, emotional story at the core and fresh scenery.

The main solutions they came up with were to delve deeper into Shaun’s relationship with the Farmer, giving the duo a sort of family, father-son dynamic. To open up the world for Shaun and his flock, they decided to contrast his country home with an on-the-go modern city. “That was kind of the bedrock of it,” says Burton. “Then we just chucked a lot of silly ideas around.”

“Because we chose a no-dialog route for the series, and because I was effectively working with a feature crew on the series … in a sense, we were kind of making mini films already,” says Starzak. “I sort of felt that Shaun as a series was sort of punching above its weight, so as a feature it was great to have that canvas, and to have that time — especially with no dialog — to get into the storytelling in a big way.”

To tackle the dialog-free story, Burton prepared a conventional, if extremely dense, script in order to provide some structure for the storyboard team to work from. The ‘boarding phase, while also important to the animation process, was especially critical on this project. The Shaun movie was an interesting introduction to directing for Burton, who credits Starzak and the rest of the highly experienced Aardman crew for handling the technical aspects so smoothly it allowed him to really focus on telling the story in the best way possible.

Starzak and Burton divided up the scenes.The physical realities of working in stop-motion meant that they couldn’t be taking up space on the same sets. The directing duo would discuss how to approach each scene ahead of time, with Starzak offering insight from his years of experience working with the process.

“What I like about stop-frame is, it’s got limitations, and I think in the early days that was quite helpful to Mark, in that I could make a good stab at what would work and what wouldn’t in stop-frame,” says Starzak. “It’s nice to have limitations, I think, because it forces you to think more in terms of storytelling — how do you put this information over, how do you show this?”

Burton notes that though the film begins on the farm with sets very similar to those used for the series (“Maybe we spent a bit more money on the grass and things,” he admits), much of the budget was spent on creating the large physical sets for the city. “There were occasions where you wanted to do a big , swooping shot and the camera would just bump the ceiling of the studio, and that’s as far as you could go … You can’t just press a button on a computer and it expands infinitely.”

A major departure from the series is the amount of crowd scenes in the film. According to the directors, Shaun set an Aardman record by having a scene that involved nearly 50 puppets, shot by one animator over a matter of weeks. “We had a cast of ‘extras’ that were actually, physically made, and we had to cycle them out,” says Burton. “You kind of had to keep an eye out that we didn’t have the same bloke with a hat walking past in every shot.”

There were between 16 and 20 animators working on active sets at any point during production, working at an unusually rapid feature pace to create about two seconds of animation a day. This was necessary to keep up with the quite short 10-month production timeline. Ultimately, the crew created the film with roughly half the crew (approximately 120 people, not including post-production) and in half the time as other Aardman films. However, many of the animators came over from the series where they are expected to bust out five or six seconds a day.

The two-man team says they are satisfied with the end result, which has been widely lauded by critics and theatergoers. In fact, there is already sequel talk buzzing around the studio. “Very early, me and Richard sat down and said, OK, we’re going to do it this way, and we want it to be funny and we want it to be emotional,” says Burton. “And, in the end, I think we achieved those things.”

“What was quite interesting to me is that people [at the screenings] said the young kids took fewer toilet breaks,” Starzak notes. “Which I took as sort of a compliment.”