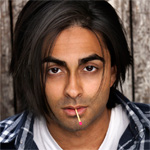 Fandom film producer Adi Shankar (Punisher: Dirty Laundry, Judge Dredd: Superfiend)  revealed on his Facebook page that he will be producing a “super violent Castlevania mini-series” based on the classic Konami videogames with veteran animation producers Fred Seibert and Kevin Kolde (Bee and PuppyCat, Bravest Warriors, Adventure Time). Shankar said in his post that the series is going to “dark, satirical, and after a decade of propaganda it will flip the vampire sub-genre on its head.”

In an extended interview with Collider, Shankar added that the story will be based on Castlevania III: Dracula’s Curse, which featured whip-wielding vampire hunter Trevor Belmont, sorceress Sypha, pirate Grant and Dracula’s son, Alucard. The producer also said he wants to bring a gory, anime-inspired series for adults to the U.S. with this project — he cites Ghost in the Shell, Akira and Young Justice as his animated influences.