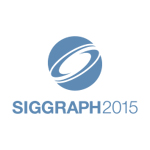 SIGGRAPH has announced the complete lineup for this year’s Production Sessions program for its 42nd annual conference, set for Aug. 9-13 at the Los Angeles Convention Center.