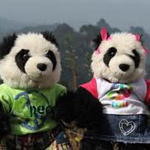 The series is being developed as a 104 x 11 min. series for ages 6-12. It will follow Chan as a teenager, offering audiences a glimpse into his early training in martial arts and his eventual journey to stardom. The only things that stand in the way of Jackie realizing his dream are his toy Panda bears La and Zy, who come alive in Jackie’s presence and create big problems for the aspiring martial artist.

The Adventures of La & Zy is written by Randy Rogel (The 7D, Animaniacs, Pinky and The Brain).

Charlie Coker and Esmond Ren will co-executive produce the series along with Jackie Chan, Bruce Stein and Steve Waterman.