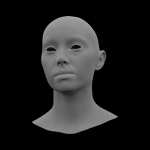 The Digital Human League has released the first batch of data in its attempt to overcome the “uncanny valley” effect in creating digital versions of humans.

The league is a group of artists started by Christopher Nichols of Chaos Group that is exploring photorealistic human faces and how to construct and render them. The work is open and the files are fully published to advance the state the of the art.

The data for the second version of Digital Emily was first released at FMX. It’s based on Emily O’Brien, who agreed to be rescanned at higher resolution that the original version. Digital Emily 2 is the first subject used in the Wikihuman project. This data, along with work done by the Digital Human League, is now available for download.

The files include the model (in Alembic format), the textures (in EXR format), and the shader (in OSL format). The creators also included a Maya scene with the shaders set up in V-Ray.

The files can be downloaded here. More information on the project can be found here.