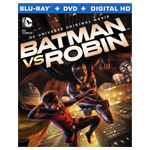 It’s a fairly quiet week on the home entertainment front, with one notable exception. The latest entry into the DC Universe Animated Original Movie canon, Batman vs. Robin (Warner Bros. Home, $19.98) pits the dynamic duo against each other in this action-packed adventure from director Jay Oliva (Batman: Assault on Arkham, Justice League: War). Reckless young hero Robin, a.k.a. Damian Wayne, is following in the footsteps of his Dark Knight dad, but when he encounters a mysterious figure called Talon who introduces him to the shadowy world of the Court of Owls, it will set him on a dangerous path that could change his destiny forever.

Based on the Court of Owls comic arc and scripted by J.M. DeMatteis (Teen Titans Go!, Batman: The Brave and the Bold), Batman vs. Robin features the voices of Jason O’Mara as Batman, Stuart Allan as Robin, Jeremy Sisto as Talon, David McCallum, Sean Maher, Grey DeLisle-Griffin, Robin Atkin Downes, Peter Onorati, Kevin Conroy and “Weird Al” Yankovic as Dollmaker. The Blu-ray version ($24.98) offers exclusive featurettes Gotham City’s Secret: The Mythic Court of Owls and The Talons of the Owls as well as audio commentary and four bonus cartoons from the DC vault. Both BD and DVD have a sneak peek at the upcoming Justice League: Gods and Monsters.