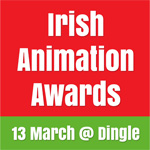 Brown Bag Films was the big winner at the first Irish Animation Awards, presented this past weekend in Dingle, Ireland.

Dingle has been home to the Dingle Film Festival and specifically Animation Dingle for the past three years.