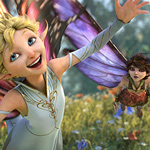 Lucasfilm digs into the details in forging its own take on the musical animated fairy-tale with Strange Magic.

If Strange Magic, the new animated feature film from Lucasfilm, arrived seemingly out of nowhere, that’s

Based on a story by George Lucas, Strange Magic has been in the works at Lucasfilm for quite a while and was considered something of a studio passion project, says director Gary Rydstrom, who worked for Lucasfilm for years as a sound re-recording mixer on everything from Indiana Jones and the Temple of Doom to the Star Wars prequel trilogy. After a stint away, including a time at Pixar where he directed the Toy Story short Hawaiian Vacation, Rydstrom returned to Lucasfilm and found himself directing Strange Magic, the company’s second animated feature film after 2011’s Rango.

Strange Magic tells the tale of a forest split in half between the light part where the fairies and elves live, and the dark part full of nasty creatures ruled by the Bog King. When fairy prince Roland decides to win back the heart of ex-fiancée Marianne, he sends an elf named Sunny into the dark forest to retrieve a magic love potion from the captured Sugarplum Fairy. The potion isn’t necessary, however, for Marianne — who heads off to rescue Sunny — to find love in the most unexpected of places.

Rydstrom says the resources Lucasilm and ILM offered the film gave it a chance to create a unique look for the film. “Lucasfilm is not an animation company,” he says. “It’s nice that it can do animation, but it does live action, too, so I think that informs the look of the movie and the animation of the movie because it doesn’t come from just an animation background.”

The movie strove for a detailed and rich look that hadn’t been seen before in an animated film. “It was nice to find our own look and style,” says Rydstrom.

Visual effects supervisor Tony Plett says his main goal was to develop the look of the movie and make it look like nothing else out there.

“We wanted to get something that was very different from oversaturated colors,” he says. “We went really pretty dark overall with high contrast. The main thing was dealing with a lot of complementary colors, so wherever we had these warm blues, we tried to add these oranges and yellows and really tried to push the look of the movie to get a lot of textural and geometric detail in there, but also really try to light this kind of real world style.”

They started with actual photography, even going out into the area around Lucas Valley Ranch and shooting photos of small creeks. “We were quickly finding out that even at this small level there’s so much detail in these photographs that we were saying how were we going to deal with this.”

Depth of field and lighting were essential keys to finding a finished look. “There’s so much detail in these environments and characters, we had to really try to focus your eye on certain areas just based on depth of field and also really kind of trying to light and vignette certain areas throughout all the show.”

The character designs and models were very detailed, which caused some worry early on but lead to new techniques for making the animation natural and realistic.

Characters were detailed but stylized enough to avoid the uncanny valley effect, a tough nut to crack but an important one for the film. “Once we figured that formula out it started to became quite easy where we were trying to get it to look realistic but not photoreal because the characters are not trying to match geometrically what humans look like,” he says.

“It all started working out,” says Plett. “With all the detail and the level of rendering, we could really push the level of animation — at least facial (animation) — for the characters.”

While ILM has done groundbreaking work with motion-capture, all the work in Strange Magic was done via key-frame animation at Lucasfilm Animation Singapore and ILM in San Francisco.

“That’s the way the animators like to do it, is act it out and think about it,” says Rydstrom. “I’ve never animated but I love working with animators because they’re like actors.”

Supervised by Kim Ooli in the Singapore studio, animators would videotape their own performances for reference and drew extensively from the voice performances and video recordings of the voice actors.

The blend between the character design, the voice performance and the animation was at times magical, Rydstrom says.

“That’s the magic of animation to me, when the voice and the animated character match, and they come together and they feel like a living breathing character sitting right in front of you,” he says. “When that works, I’m happy.”

On the technical side, this level of detail required a new tool called Metropolis, which was developed to push the geometry through the renderers. “(It) was actually a way to populate these environments to get a lot of detail, so we could scatter hundreds of thousands of rocks, we could add hundreds of thousands blades of grass, we could do everything to the extreme of these environments to make them look extremely detailed.”

Putting songs into the film was an ongoing process for the film, Rydstrom says. Music director Marius de Vries went through many possible options before arriving at choices that fit the movie’s story and the characters’ state of mind.

“The whole idea of musical structure is not something I knew much about,” says Rydstrom. “My job as the naive watcher of musicals was to make sure that any moment a character breaks into song doesn’t feel out of place.”

He cites as a favorite the Deep Purple song “Mistreated,” which plays as the Bog King returns home to find the Sugarplum Fairy’s magical love potion has gone missing. “Almost all the songs the lyrics make sense for what’s going on in the character’s head at that moment,” he says. “It was hard to do but I can’t tell you how much fun it was to do a musical.”

Animating the songs presented some interesting challenges. “Usually you can cut frames wherever you like and you can re-edit things,” says Plett. “Having these songs, you’re pretty much locked in and it trickles all the way down to the recordings, where it’s not just a simple re-recording of dialog.”

Getting right the facial expressions of characters singing also was difficult. “You have to really hit those shapes properly, and when you don’t, you really notice it, as far as expressions and synch,” says Plett.

Rydstrom says he thinks the level of heart the crew put into the movie can be seen in the final product — and he hopes audiences feel the same way.

“I hope people, especially people who love animation will see something a little bit different looking, something that has the personality of this company,” says Rydstrom. “I like that, I like that it’s different.”