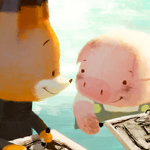 Pixar veterans go their own way to create their own film, The Dam Keeper, one of the year’s most acclaimed shorts.

For many animators, both aspiring and established, a gig at Pixar Animation Studios is a dream job that once in hand few would imagine ever even thinking of walking away from.

But when you do so to direct an animated short film like The Dam Keeper, which has screened at some of the world’s most prestigious film festivals and won more than a dozen awards, it’s easier to understand Robert Kondo and Daisuke “Dice” Tsutsumi did exactly that.

The pair had worked together at Pixar as art directors on such hit movies as Toy Story 3 and Monsters University and found they had similar sensibilities and tastes.

The pair started work on the story after hours and on weekends during the production of Monsters University, eventually writing five different treatments. Figuring out the common threads in those treatments was a big step toward finding the story of The Dam Keeper. The film is set in a desolate future where one small town’s survival is solely due to a large windmill dam that acts as a fan to keep out poisonous clouds. Despite bullying from classmates and an indifferent public, the dam’s operator, Pig, works tirelessly to keep the sails spinning in order to protect the town. When a new student, Fox, joins Pig’s class, everything begins to change.

“Our goal creatively was to tell an emotional story about a character who changes the way he sees the world,” says Kondo. “And part of that is Dice and are not particularly funny people, we take ourselves pretty seriously, I think. And we just know so many artists who are moved by those particular kinds of films … so that’s the sort of story we wanted to tell in our first endeavor writing.”

“We kept finding that our hero was always this unsung kind of hero,” says Kondo. “We also found that the world always had some kind of pollution in it. And the third thing was we were always pushing this character to change the way they see the world rather than the world around them changing.”

Among the stories they remembered from their youths was that of The Little Dutch Boy, who saves his low-lying down from flooding during a storm by selflessly plugging a leak in the dam with his finger until someone discovers him. That struck a note with the filmmakers, who decided to make their story about a character that has a big daily responsibility to save the town but the townsfolk were unaware of it.

When Kondo agreed, the duo planned to take three months off from the studio. “We were naively thinking we could finish the whole thing in three months, which wasn’t the case,” says Tsutsumi.

It actually ended up taking about nine months in production as the movie expanded from a planned seven- or eight-minute short to an 18-minute short. And that was with the duo bringing on Pixar colleagues Duncan Ramsay and Megan Bartel as producers to hire a crew and coordinate schedules.

Kondo says no one worked full time on the project, and Ramsay and Bartel were very good at getting talented creators to pitch in as they had time and get the work done with a high level of quality.

The reality of both independent production and directing was a bit of a shock for Kondo and Tsutsumi, who had to take on time-consuming IT tasks like installing software. “We thought we knew how animated filmmaking worked, and I felt like every day we were putting out a fire,” says Tsutsumi.

For a pair of art directors, Kondo and Tsutsumi relished tackling the look of the film. “We were expecting that would be the fun part, that we’d get to design it any way we wanted and wouldn’t have anyone else tell us otherwise,” says Tsutsumi. “But we were struggling so much to figure out the story and even learning how to direct that the art-design process ended up becoming such a streamlined one that we didn’t end up spending as much time on it as we were hoping we would.”

As a result, the look of the film became a very comfortable area of how the pair paints normally, says Tsutsumi.

“We had worked at large studios for a long time, but the real understanding of how much it takes everybody on their A game to make something that you are really proud of,” says Kondo. “It’s so clear to me that we needed everyone to contribute their absolute best to make the film and I really feel like everyone around us pushed us to make the best film that we could.”

Finishing the film pushed the duo into yet another new space as they began showing it to audiences and got feedback on it. They were surprised to find their film was the happiest of the bunch screening in the children’s section at the Berlin Film Festival, for example. Their favorite screening, though, was one for a classroom of fifth graders.

The experience of making The Dam Keeper was a real awakening for the directors, who as of July have left Pixar to explore other options. “We really feel like we grew as filmmakers and as artists. And we didn’t want to stop,” says Kondo.

“We loved working there, but we felt at some point we had to acutlaly go out on our own and grow into the next phase of our career,” says Tsutsumi. “Both of us just love film and animation and so we are trying to make animated films, whether it’s a serial format television show or a feature film, we are developing a few projects right now and we’re going to be pitching some time next year.”