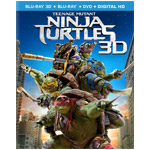 ‘TMNT’ Fights for a Spot in Your Video Collection

The most-recent theatrical take on the classic comic-book heroes turned animation stars arrives having surprised pundits and critics with a successful box office run and an announced sequel. (Check out our cover story on the film from Animation Magazine #242 here.)

Animation fans have a chance to add at last the hit Cartoon Network series Uncle Grandpa to their video collections with the release this week of Uncle Grandpa: Tiger Trails (Warner Bros., $14.97 DVD). The disc collects 12 episodes of the hit series created by Pete Browngardt.

If you haven’t had a chance to see it yet, here are a couple of clips to tempt you: