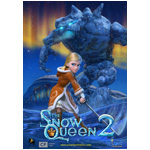 Wizart Animation has released new images and clips for its CG sequel The Snow Queen 2, a Russian production which has been named eligible for consideration in the 2015 Golden Globe Awards “Best Animated Feature Film” category. Directed by Aleksey Tsitsilin, the film is being released day-and-date in numerous territories across Europe and Asia, with more global debuts to follow.