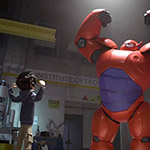 As technology gets bigger and the world gets smaller, the annual animated feature landscape becomes more and more diverse, with audiences and critics alike willing to step outside their kiddie-fare comfort zones and well-trod fairy tale fare for something truly inspired. Of course, some of these attempts fall right on their polygon riddled faces, but until the Academy reveals the lucky few who will compete for the Oscar statuette, let’s take a broad view.

Mr. Peabody & Sherman
Studio: DreamWorks Animation
Distributor: Fox
Director: Rob Minkoff
Release Date: March 7
Box Office: $272.9m ($111.5)
Synopsis: Genius canine Mr. Peabody, his boy Sherman and rival classmate Penny get caught up in a whirlwind romp through history in the WABAC machine after a joyride to ancient times goes wrong — with dire consequences for the space-time conitinuum.
Pros & Cons: The popularity of Jay Ward’s interstitial toon stars of the mid-20th century drew audiences to this CG update, but critics gave the film a lukewarm reception. Some got into the spirit of the off-kilter adventure, while others felt the story got off to a slow start and was more saccharine than its short format inspiration.

Rio 2
Studio: Blue Sky Studios, Fox Animation
Distributor: Fox
Director: Carlos Saldanha
Release Date: April 11
Box Office: $496.7m ($131.5m)
Synopsis: Blu, Jewel and their three nestlings return to the Amazon in search of an elusive, wild blue macaw along with their human pals. But Blu must evade the plottings of his old nemesis, Nigel the cockatoo, and face perhaps the most terrifying challenge of all: winning over his father-in-law.
Pros & Cons: Despite a strong box-office result, critics gave Blu and Jewel’s return middling reviews. While the film’s colorful, musical, fun-filled spirit made for an enjoyable distraction, many felt the story was too by-the-numbers and fell into the usual sequel traps.

How to Train Your Dragon 2
Studio: DreamWorks Animation
Distributor: Fox
Director: Dean DeBlois
Release Date: June 13
Box Office: $614.9m ($176.5m)
Synopsis: Five years after the first outing, the vikings of Berk are obsessed with the new sport of Dragon Racing. But Hiccup and Toothless are busy charting unknown lands, and in their adventures discover new dragons and mysterious Rider — and find themselves in the middle of a struggle that will determine the fate of humans and dragons alike.
Pros & Cons: Returning audiences were overwhelming pleased with Dragon 2, making it the year’s top-grossing animated feature, as were critics wary of The Curse of the Sequel. With a third film planned for the franchise, the Academy might watch and wait to see where Hiccup goes from here before bestowing another nomination.

The Boxtrolls
Studio: LAIKA
Distributor: Focus
Directors: Graham Annable, Anthony Stacchi
Release Date: September 26
Box Office: $82.3m ($46.2m)
Synopsis: An orphaned human boy raised by cavern-dwelling Boxtrolls must confront his own dual identity as he works to free his misunderstood family from the clutches of a villainous, social-climbing exterminator with the help of a plucky rich girl who is starved for attention from her snooty father.
Pros & Cons: LAIKA succeeds in offering a refreshingly surreal, impeccably hand-crafted third feature from its hard working stop-motion studio. Critics were somewhat divided on whether the film’s quirky humor and darker turns were a boon or a bust.

The Book of Life
Studio: Reel FX
Distributor: Fox
Director: Jorge Gutierrez
Release Date: October 17
Box Office: $26.2m ($17.8m)
Synopsis: Inspired by Mexico’s Day of the Dead celebration, this colorful adventure follows dreamer Manolo and his rival in love, a haughty town hero named Joaquin, as they journey through magical other worlds after two powerful gods make a wager on their futures.
Pros & Cons: Critics overwhelmingly lauded the film’s vibrant, intricate CG animation. And while it is a big step forward from Reel FX’s debut feature Free Birds, some found the story and dialog failing to measure up.

The Tale of the Princess Kaguya
Studio: Studio Ghibli
Distributor: GKIDS
Director: Isao Takahata
Release Date: October 17 (limited)
Box Office: $24.6m (Japan)
Synopsis: Adapted from Japanese folk tale “The Tale of the Bamboo Cutter,” Kaguya centers on a tiny girl discovered in a shining stalk of bamboo by an old bamboo cutter and his wife. The girl rapidly grows into an exquisite young lady who enthralls all who encounter her — but ultimately she must confront her otherworldly fate.
Pros & Cons: Takahata has not helmed a film in years, but he is anything but rusty. The film’s achingly beautiful watercolor and ink-style animation and expertly adapted story have already earned it a nomination for the coveted Japan Academy Prize for animation, and Western critics are jumping on the bandwagon.

Big Hero 6
Studio: Disney
Directors: Don Hall, Chris Williams
Release Date: November 7
Synopsis: Based on the Marvel comics by Steven T. Seagle and Duncan Rouleau, Hiro — a young robotics prodigy living in San Fransokyo — and the soft-body helper ‘bot Baymax created by his late brother uncover a criminal plot and must pull together a team of inexperienced crime fighters, outfitting them with powerful cybernetic armor in order to solve the mystery surrounding the crime.
Pros & Cons: Disney is hoping Big Hero 6 will be an action-focused answer to last year’s winner Frozen, blending humor, soaring sci-fi effects and hopefully enough of an emotional impact to win over the Academy.

Penguins of Madagascar
Studio: DreamWorks Animation
Distributor: Fox
Directors: Simon J. Smith, Eric Darnell
Release Date: November 26
Synopsis: Skipper, Kowalski, Rico and Private are sent on their most epic espionage mission yet when they are contracted by the North Wind — an inter-species task force dedicated to helping animals — to help stop Dr. Octavius Brine’s malicious world domination plans.
Pros & Cons: The intrepid Antarctic transplants who stole the show in smash-hit Madagascar finally get their own feature, building on the success of direct-to-video and TV projects. DWA is confident enough in the film to bump it up to the competitive Thanksgiving weekend slot.

Song of the Sea
Studio: Cartoon Saloon
Distributor: GKIDS
Director: Tomm Moore
Release Date: December 19 (limited)
Synopsis: Inspired by old Irish folk legends of the Selkies — magical beings who are human on land but take the form of seals in the water — this indie centers on young Ben and his little sister Saoirse who is mute. When their distraught widower father sends them to live in the city, they must find their way home and discover how to bring their mother’s legacy to life with Saoirse’s special gifts and a magic flute.
Pros & Cons: Moore’s long-awaited follow up to the Oscar nominated The Secret of Kells is garnering positive early reviews for its gorgeous artwork, nuanced characters and delicate balance of real world emotion and old world fantasy.

Jack and the Cuckoo-Clock Heart
Studio: EuropaCorp
Distributor: Shout! Factory
Directors: Mathias Malzieu, Stéphane Berla
Release Date: February 5 (France)
Box Office: $3.4m
Synopsis: Jack is born on the coldest day of the year, the temperature stopping his heart. A clever midwife revives him with a clockwork heart, but in order to survive he must learn to control his emotions — something that proves difficult when he falls in love with a young street musician.
Pros & Cons: Malzieu’s adaptation of his graphic novel and concept album has had audience eyeballs popping all over the globe with its haunting CG design and fantastical plot. But those accustomed to U.S. blockbusters may struggle with the very Euro approach to storytelling.