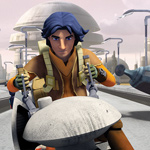 Disney XD’s Star Wars Rebels plots a course back to the franchise’s storytelling and visual roots.

After some 15 years of focusing all its storytelling machinery on the prequel era, the Star Wars saga gets back to its roots with Star Wars Rebels, a new Disney XD animated series that seeks to revive the look and feel of the movie that started it all.

“Having just finished (as supervising director on a feature and six seasons of) Star Wars: The Clone Wars — and it was such a juggernaut of many, many, many different stories — we wanted to completely jump out of that and do something that was a little more familiar to the older set of fans: the more effervescent, inspirational Star Wars that a bunch of us had grown up with,” says Dave Filoni, executive producer along with Greg Weisman and Simon Kinberg on Rebels, the first animated Star Wars series launch since Disney acquired Lucasfilm in 2012. “A lot of that made the classic era almost like a brand-new era again since we hadn’t seen TIE Fighters and Star Destroyers or those type of things in a very long time.”

Setting the film before the original trilogy allows the show to move toward the first film’s tone, which is simpler and more character-focused than the political machinery that dominated the prequel series.

“The prequels were really about seeing the big political machinations, which were just as important — if not more important — than the personal stories going on, because you were seeing this big galactic collapse of an entire form of government and way of life and the Jedi Order,” says Filoni. “We wanted Rebels to live more in the Han, Luke and Leia idea of you’re just going to focus on the crew of the Ghost, you’re just with these people, and you’re seeing everything from their point of view.”

The look of the series also takes inspiration from Star Wars origins, with Ralph McQuarrie’s classic production paintings made to define the visuals — and sell the very concept — of Star Wars, serving as the primary reference material. For example, the design for Zeb is a variation on one of McQuarrie’s designs for Chewbacca, while Chopper looks a lot like early versions of R2-D2.

“I think these character designs look more like what people expected the first time around from an animated Star Wars universe,” says Filoni. “These characters are a bit more rounded in shape; they have more exaggerated expressions than anything we did on Clone Wars, which was very lifelike and realistic. I wanted to capitalize on some of the bigger expressiveness that you can do in animation.”

The focus on character was particularly appealing to the voice cast. Prinze Jr. says Kanan’s history becomes an important element early on. “We go back to it very early on and you get to see a lot of the insecurity with Kanan and you get an incredible moment that steels his resolve and removes his doubt and that moment enables him to go forward and do what he needs to do,” he says.

This is the first animation project for Kinberg, whose writing and producing credits include Mr. and Mrs. Smith, Sherlock Holmes and the X-Men movie series. Kinberg originally came onto Star Wars to work on the new feature films, but found the animated series and its idea of going back to basics appealing, too. “I had a very clear sense in my mind what that meant tonally and character wise, and Dave had a very clear sense of what that meant visually,” says Kinberg. “And the second he stated talking about Ralph’s art and showing some of it and we all felt like this is exactly the right look for the show and almost a statement to make, almost a mission statement about declaring the show is like the original original.”

The work done by Lucasfilm’s new colleagues at Disney on the 2010 film Tangled was another influence, Filoni says. “It was something where I thought someone had taken what they did in 2D and just matched it brilliantly in CG.”

Filoni says the animation pipeline is generally the same as it was on Clone Wars, with service work again handled by CGCG in Taiwan. But there was an attempt to get back to basics, and Filoni says they switched to ToonBoom software, which has allowed hand-drawn storyboards back into the process.

“I felt that traditional storyboarding was going to be more successful in that regard and we wanted the character animation to be more I guess classic as far as animation style goes,” says Filoni.

McQuarrie’s look was incorporated into the tools used to create the show. “We were able to create some digital brushes that mimic the way he would paint and the way that he would render lines, and we had all the designers using those same brushes,” says Filoni. “We’re always comparing our final frames to his paintings and I think that alone makes us keep it very organic. And having the rolling fields of grass and stuff definitely puts us in an extremely organic environment, one that Ralph had designed for the original trilogy. That and I think the brushes are what’s lending a kind of more hand-drawn feel to things in Rebels.”

The storytelling also takes a page from the original trilogy, focusing on the story of one crew and leaving room for the humor, character and cinematic style that helped make Star Wars a hit in the first place. “I wanted cameras to be a bit more limited in this series and feel a bit more like in the original trilogy, which doesn’t have as many flying cameras or long shots as you saw in the prequel era,” says Filoni.

Filoni says he has an overall story for the series as well as an ending in mind, though it’s not set completely in stone because you never know how long a show like this will run or where its characters will take it. “We know roughly how our story goes and where it goes in relation to A New Hope, at least,” he says.

Fans shouldn’t expect to see much of is appearances by established movie series characters that are active in this time frame, such as Darth Vader or Chewbacca. “It’s very possible for us to bring classic characters, prequel characters into Star Wars Rebels; we just have to have a good reason to do it,” says Filoni. “We don’t want ‘small universe syndrome,’ where it seems like everybody knows everybody else.”

In the end, Filoni is a huge fan of Star Wars and that was one of — if not the major — reason he re-upped for another tour of duty in the galaxy far, far away.

“I wanted to make sure that we could maintain the legacy that had been created here and that I was so fortunate to have been a part of in the last eight years,” says Filoni. “But mostly it was just that I just love Star Wars and I wanted to maintain George (Lucas’s) legacy, which is something I felt very strongly about and still do.”