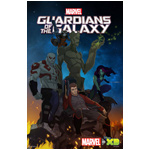 Production has begun on Marvel’s Guardians of the Galaxy, an upcoming animated-television series for Disney XD, featuring the hugely popular characters introduced in the record-breaking Marvel Studios film of the same name.

The announcement was made Friday by Jeph Loeb, Marvel’s Head of Television, at New York Comic-Con.

Produced by Marvel Television, the series features Peter Quill as Star-Lord, the brash adventurer who, to save the universe from its greatest threats, joins forces with a quartet of disparate misfits: fan-favorite Rocket Raccoon; a tree-like humanoid named Groot; the enigmatic, expert fighter Gamora; and the rough-edged warrior Drax the Destroyer.

The series will premiere in 2015 on the Marvel Universe programming block on Disney XD.