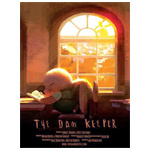 Produced by Tonko House Studio, the short tells the tale of a young pig with an important job, and a new classmate who changes everything. The film blends traditional hand-drawn animation with digital painting techniques.