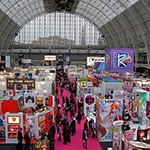 Colorful characters from around the world will convene in London for the annual L&M confab.

This year marks the 16th edition of Brand Licensing Europe, taking place October 7-9 at London’s Olympia. Organized by Advanstar, 2014 will be the biggest show yet with roughly 235 exhibitors — over 55 of which are brand new to the event. Some new gaming and animation faces on the floor include BANDAI NAMCO Games, Boj and The Jim Henson Group. Visit www.brandlicensing.eu for more information.

Home-grown stop-motion powerhouse Aardman Animations is gearing up for The Year of the Sheep in 2015, when Shaun the Sheep: The Movie will hit theaters. The studio’s rights division will unveil further plans for Shaun and established brands Wallace & Gromit, Timmy Time and Morph.

Shaun the Sheep was recently named the U.K.’s favorite BBC children’s character of all time, and can be seen on major broadcasters around the world. The film’s release will be presaged by themed celebrations and promotional events, including a “Shaun in the City” arts trail showcasing 120 Shaun sculptures decorated by celebs and artists coming to London and Bristol. In the U.K., consumers can soon pick up Shaun the Sheep: Tales from Mossy Bottom Farm (Walker Books), plush toys (Rainbow Designs) and products from Cooneen, Kids@Play, Giromax, Centum and Fashion U.K. BBC One will round out the Year of the Sheep with a brand new half-hour special at Christmas.

Saban Brands brings a diverse portfolio to BLE. Soon-to-launch multi-platform property Emojiville, in partnership with Jakks Pacific, will kick off with an original web series this fall and debut as a global TV series next year — Jakks will support the brand with a full consumer products line. Also arriving in 2015 will be the re-imagined Popples based on the ‘80s toy line and cartoon. Spin Master is the global master toy licensee for Popples and is planning a full range of toys including small dolls, collectible figures, playsets and plush for the U.S. with an eye to global expansion.

Returning to the floor is hit preschool series Julius Jr., inspired by Paul Frank and kicking off season two on Nick Jr. this fall. Julius Jr.’s U.S. consumer products program includes Fisher-Price toys at Toys ‘R’ Us, Walmart, Target and Amazon, which also carries the Random House Children’s Books line along with Barnes & Noble. And anime property Digimon Fusion continues to grow, having achieved No. 1 ratings in the U.K. (CITV) and Canada (YTV) — the show also airs in the U.S. (Nicktoons), Australia (Go!), Spain (Clan TV) and other key markets.

The Next Thing in Monster Battling

BANDAI NAMCO has seen great success at home in Japan from new anime, manga, toy and game franchise featuring collectible mini-monsters based on Japanese pop culture and folklore archetypes: Yo-Kai Watch. Locally, over $90 million worth of toys based on the property have been sold since April, giving retailers a hint that they have a new Pokemon on their hands.

Shiny new animated preschool comedy series Boj, produced by Pesky Productions (U.K.) in association with Kavaleer (Ireland) and Cloth Cat (U.K.), will be bundled off to BLE for the first time this year to build on its small screen success. The show premiered on Cbeebies earlier this year — also airing on RTEJr and S4C — and follows the adventure of Boj, an exuberant young bilby (an endangered species from Australia) who lives in a burrow under Giggly Park with his musical parents.

The 52 x 11 series recently arrive on ABC Australia and is expected on Sprout in the U.S. this fall, with new episodes slated for a Cbeebies debut in the near future. Boj and his creative “boj-a-boom” ideas can also be found in interactive App books and soon to be released mobile games. The creators are planning a high profile roll out to other major territories over the next year and have big ideas for their little star’s licensing future.

Fans of retro-fabulous comic characters like Popeye and Betty Boop are rarely at a loss for slick, creatively designed togs to covet (especially if they’re limited edition). King Features — which represents Popeye and, in collaboration with Fleischer Studios, Betty Boop — continues to sign cool deals to keep these decades-old properties populating shelves and will be showing off their latest collaborative products at the show.

Topping the shopping list are product ranges featuring fresh designs from Japanese graphic artist Shinzi Katoh, which will launch in Japan and subsequently roll out internationally. The first Popeye designs were unveiled at the Tokyo Gift Show and will be showcased at BLE. Katoh, who has collaborated with Disney, Paddington Bear and Hello Kitty, came up with the project based on his love for the classic black and white cartoons growing up.

According to a recent survey of 30,000 children and parents around the world conducted by Kidz Global on behalf of the Licensing Industry Merchandisers’ Association (LIMA), Mattel’s fashion doll that started it all Barbie and construction toy (and so much more) LEGO are the most popular licenses with girls and boys.