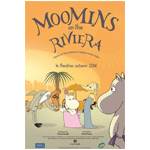 English Cast Set for ‘Moomins on the Riviera’

The English dub cast has been set for the animated feature Moomins on the Riviera.

Based on the comic strips by Tove Jansson, Moomins on the Riviera takes the Moomin family from their beloved Moominvalley to the glamorous Riviera, where Moominpappa befriends an aristocrat and adopts the name “de Moomin”; Snorkmaiden is dazzled by the attentions of a playboy; and Moomin learns that jealousy’s sting is the most painful of all as, for the very first time, the unity of the Moomins is threatened.

The feature is directed by Xavier Picard and produced by Hanna Hemilä and will be released in October, first with a theatrical release throughout the Nordic region.